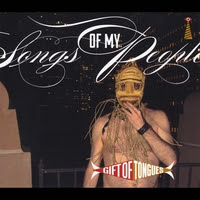 Gift Of Tongues – Songs Of My People
2013, Gift Of Tongues
Performance Art is one of the most inscrutable subjects in the art world.  There are those who swear by its pure, creative powers, and those who scoff at the very idea.  Words like “legitimate” get thrown around in arguments over what performance art is or should be.  These discussions are moot, in any case.  The mere fact that these discussions happen in such heated fashion is proof of value, so to speak.  Nevertheless, when performance art and something structured, such as music, become one, there are going to be fights.  That would seem to be the challenge of Gift Of Tongues’ new album, Songs Of My People.


Gift Of Tongues is the musical outlet of performance artist David E. Johnston.  Collaborating with a host of talent New York City musicians, Johnston manages to carve out a sonic space that’s part electronic, part dance and part neo-folk.  Gift Of Tongues runs the gamut, from invective-laden stream of conscious songs to kitschy story-teller style tunes.  Johnston drives through the entire set without remorse or hesitation, occasionally perhaps unaware of the spectacle he leaves in his wake.
Gift Of Tongues kick things off in surreal style with “Preamble”, a spoken word gem from a mecha-musical overlord whose thematic grace is right out of George Orwell’s 1984.  “The Universe” is a rambling rumination on the concept of “use it or lose it”.  Gift Of Tongues create an interesting musical air here, like the theoretical middle ground between Fatboy Slim and Nine Inch Nails.  “Home” makes intriguing use of organic and found sounds in its musical construction.  While initially intriguing, the song does fall into a repetitive loop that becomes impossible to escape.  “Big Bad Wolf” is quite catchy and full of atypical sounds.  Extensive vocal effects are used to here to create a sort of steam punk-electro feel.


“Glory Hole” is an adolescent day dream out of the dark ages.  There’s a definitive electro-dance feel to the arrangement, but there’s also a subtle perversion that runs through the sun that’s disturbing.  “I Am A Large Man” appears to have several potential interpretations, each of which is somewhat disturbing.  This is all delivered in the guise of a modern love song that may very well be what it appears, but forgive yourself a few doubts along the way.  “Gift Of Tongues” refers to the Pentecostal practices of snake handling and speaking in tongues.  Johnson addresses his cynicism in subtle sarcasm and a tasty dance beat.  “Dahmeresque” is the very definition of a Freudian oral character magnified through the lens of psychosis.  Perhaps the most intriguing aspect of the song is the 1980’s new wave/dance arrangement (think Mike & The Mechanics).  The juxtaposition is almost comical, but will definitely get your toes tapping.
“I Was A Soldier” has a dark and hopeless feel to it.  It’s an intriguing sound but not something you might feel inclined to listen through on a regular basis.  “Cock-a-Roach”, on the other hand, is catchy and entertaining.  This has potential club hit written all over it, from the catchy, incestuous beats to the whimsical subject matter.  “What’s Mommy Getting Up To?” has a complicated but workable dance beat.  The lyrical flow feels a bit forced however, and the chorus is a bit too repetitive for comfort. “10050 Cielo Drive” starts out sounding like soundtrack material from a horror movie.  The arrangement is something of a sonic mess, and overcomes anything else that Gift Of Tongues is trying to accomplish.  “America (The Beautiful)” reverts to the electro/steam punk style we heard early on from Gift Of Tongues.  This settles down into a rote dance beat before it’s done, but Johnson’s vision is vibrant and clear.  Gift Of Tongues says goodnight with the eminently catchy and country flavored dance pop of “Long Way Home”.  This will definitely get your feet moving, and may tend to sunset listeners in a positive light.


Songs Of My People is eclectic and fun; occasionally maddening, and ultimately listenable in its complicated simplicity.  As a listener you’re never entirely sure whether Daniel E. Johnston is writing from a serious place or just leading you on into the nebulous mind of the character.  Either way, the trip is entertaining.
Rating:  3.5 Stars (Out of 5)