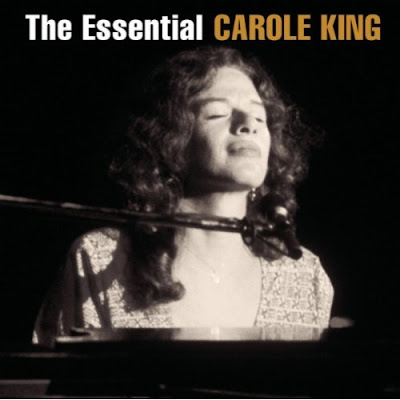 It shouldn't surprise anyone that an essential collection of Carole King's best songs should require more than one CD to hold them all. King has written more hits for other people than most big name artists ever manage for themselves. She's also an outstanding performer whose esteem in the music business continues to grow even today. In May of this year, Ode Sounds & Visuals, in conjunction with Sony Music Entertainment, released The Essential Carole King. Because of King's success both as a songwriter for others and for herself, The Essential Carole King is logically split into two CDs, one for King as a solo performer, and one featuring King's songs that were hits for others.

Unless you've followed her closely over the years, you may be surprised by some of the songs attributed to King. Songs such as "You've Got A Friend", "Will You Still Love Me Tomorrow", "Really Rosie", "Some Kind Of Wonderful", "So Far Away" and "I Feel The Earth Move" are all King classics. The covers are more indicative of the sort of success King has been over the years, however. "Up On The Roof", "The Loco-Motion", "One Fine Day", "Hey Girl" and "(You Make Me Feel Like) A Natural Woman" help to define the breadth of her talent as a songwriter. The use of classic recordings by the artists that made these songs famous for King is a novel and welcome move, offering different perspectives on her style and depth as a songwriter.

Very often these sorts of compilations are gratuitous, concocted by the record companies to squeeze more profit out of an artist's existing catalog rather than investing in new material. But occasionally a collection comes along that's worth its own weight. The Essential Carole King is one such collection. It would be expensive to collect all these songs together on CD or LP (or even on MP3), but The Essential Carole King offers up a greatest hits package that doesn't short on either the adjective or the noun.

Rating: 4 Stars (Out of 5)
Lean more about Carole King at http://www.caroleking.com/. The Essential Carole King is available from Amazon.com as either a CD or download. Digital copies are also available (and much cheaper) from iTunes.
Posted by Wildy at 5:29 AM

I saw Carole King in concert a few years back, and is voice is still amazing many years later! but James Taylor Tickets go sky high priced. Even that, I’ve never miss her concerts & I can’t wait to see her with James Taylor again this summer.

I saw Carole King in concert a few years back, and is voice is still amazing many years later! but Carole King Tickets go sky high priced. Even that, I’ve never miss her concerts & I can’t wait to see her with James Taylor again this summer.