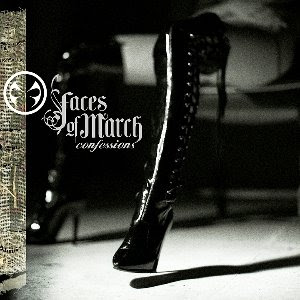 Miami, Florida seems to have sparked the creative side of Faces Of March. The modern rock quartet originated from a chance meeting of Vocalist Gia and drummer Eli while checking out a bulletin board in a local music store. Joe (guitar) and Marcelo (bass) were soon brought into the mix and a sort of musical alchemy erupted. Faces Of March brings a devastatingly pure modern rock sound blended with electronic elements, courtesy of Producer Paul Trust (Endo, Crease, Diecast). Faces of March's debut album, Confessions, is boldly confessional, sonically fresh and full of the raw magnetism of vocalist Gia. Add in the wall of sound production and clean musical lines and you have the recipe for a monster hit.

Confessions opens with Not Enough, a highly commercial heavy rocker with orchestral augmentation. This is the most radio-ready song on the album, and the least compelling. Faces Of March establish a strong sound that's part Evanescence, part Nickelback and part singer-songwriter confessional. Not Enough is a great pop/rock radio song, but lacks the sort of energy that lies underneath a lot of Faces of March's material. Drowning is a slower tune but gives a stronger sense of emotion -- a compelling desperation that is palpable. Broken allows vocalist Gia to show some more of the color of her voice. It's still very highly produced pop music disguised as heavy rock, but some more personality emerges here.

Too Late is the moment you're waiting for. The tune opens as a piano ballad with Gia on vocals. The tough but tender presentation here comes across as startlingly real in spite of the slick production values evident through the album. Gia has a pouty, sultry voice that could work as easily on jazz or pop as it does in the heavy rock arena. One could imagine her becoming a star as a solo artist as easily as with fronting a band. Who's To Blame is one of the more imaginative arrangements on the album, particularly with the layered vocals and big wall of sound guitar.

What's most interesting is that Faces Of March really shines when they strip down to an acoustic sound. This seems generally to only happen for the first verse or so of any given song (if at all), but there are indications that Faces Of March aren't just bangers. These folks can play, and you can almost hear some progressive rock roots in there at times. Nothing sounds like something that could have come out of the late 1970's, infusing electronic orchestral sounds over acoustic guitar to support Gia. This is by far my favorite song on the disc, and is good enough to be commercial (rather than being commercial enough to do well). Be sure to check out Alone and Wanna Be as well, they're both great tracks.

What to say? Faces Of March is radio-ready. They are more than competent. Their songs will get airplay and if things fall the right way they might just make it big. Producer Paul Trust has tamed this wild young band into a commercial sound that should move Faces Of March's career forward nicely, but a part of me wants to hear that inherent musical wildness come to the fore once in a while. This is a band that has an itch to break down that barrier and infuse elements of progressive rock and perhaps even some punk. You can hear it, tightly contained, in the songs that they play. I am sure it comes out on stage, but it would be awesome if it came out in the writing. I think that's where the real magic is for Faces of Match. In the meantime, Confessions is a strong debut. Perhaps it will make enough of a mark for Faces Of March to be able to branch out and allow some of that deeper personality to shine through.

You can learn more about Faces Of March at www.myspace.com/facesofmarch or http://www.facesofmarch.com/, where you can purchase a copy of Confessions.