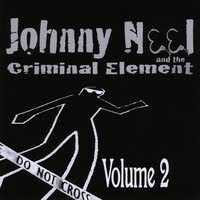 Johnny Neel has it all, really. A top-level session player in Nashville, Neel has a Grammy nomination under his belt and has written songs recorded by The Allman Brothers, John Mayall, Joe Louis Walker, The Oak Ridge Boys, Marie Osmond and Travis Tritt. Neel is also well-respected as a performer, with a small but significant following mostly on the East Coast of the US. Neel’s sixth solo album, Johnny Neel And The Criminal Element Volume 2, was released earlier this year; A mix of Rock and Blues pervades the disc.

Volume 2 opens with Go, a great mid-tempo Blues/Rock hybrid with some intriguing minor-key vocal harmonies in the chorus. The song is strong overall, but the chorus adds that "gotcha" that draws listeners in and convinces them to stay for a while. Pass Out is a funky Rock jam that turns psychedelic before slamming back into the funk. Thing P-Funk meets Pink Floyd. Thunder is an impressive track, combining a pure Classic/Southern Rock sound with elements of Jazz, Funk and Soul. You'll want to get moving when this song is one. Smackin' Pepper goes for the ten-minute instrumental jam thing and ends up sounding a bit like album filler, although the Moog work in particular is impressive. Hot Beer Emergency mixes Styx-style keyboards with Southern Rock guitar for the most intriguing composition on the disc. Here Right Now is a fun and catchy Classic Rock paean that turns into an extended jam. Neel closes out with Playin' On The Tracks, a decent tune but probably not the best choice as a closer to the album.

Johnny Neel rips it up with his guitar, playing some of the hottest Rock and Blues guitar out there. The songwriting and composition here ranges from above average to excellent, although the extended jams do end up sounding like filler at times. Neel's band is as sharp as a tack, and no matter your inclination you'll find something here to enjoy. Johnny Neel And The Criminal Element, Volume 2 is definitely worth checking out.