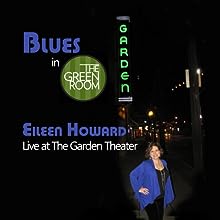 Eileen Howard is a decorated veteran of theater and song.  Recognized for her regional work in productions such as A New Brain, Sylvia, and Jerry’s Girls; Howard’s career as a recording artist spans 20 years and five albums.  Her latest effort, a live recording entitled Blues in the Green Room, shows a consummate artist at the top of her game knocking on the door of greatness.

Eileen Howard throws down the gauntlet right from the opening strains of “Stormy Day Blues”.  Listeners are greeted by scorching be-bop and blues style guitar work out of the gate, and Howard’s powerful and enigmatic voice lies in over the top like first class diva should.  She treats “Fever” with all of the sensuality and desire the song deserves.  Howard is in perfect voice, and her backing band is first class with a bullet.  Howard rocks out on the Willie Dixon classic “Built for Comfort”, which serves the alternate purpose of celebrating the devilishly amazing guitar work of David Bennett.  Howard turns wistful on “It’s Easy to Remember”, the Rodgers & Hart standard.  Howard mines the song for emotion, using the depth of her voice and varying vocal tones to bring out the subtle nuances of the song.  Nat “King” Cole’s “Frim Fram Sauce” gets taken for a walk next, and Howard digs in for all of the humor of Redd Evans’ lyrics as well as the melodic genius that was all Cole.  Randy Mather adds a classic sax solo to the mix.

“Everybody’s Cryin’ Mercy” (Mose Allison) finds Howard taking something of a breather.  She gives full effort to the song, and handles it capably, but this is a breather both for artist and the crowd.  Howard is back at her vocal and comic best with Bessie Smith’s “I Need A Little Sugar in My Bowl”.  Howard’s vocals are stellar, and she vamps the crowd like a Vegas pro.  David Bennett once again offers up some tremendous guitar work, but the instrumental standout this time is the keyboard work of Ed Moed.  Howard puts her diva on for “Black Coffee”, squeezing every drip of melancholy out of the song while the band matches her step-for-step.  Howard takes on the feminist blues anthem “Wild Women Don’t Have The Blues”.  Howard’s vocals are top of the charts. Unfortunately this song has been so overdone in recent years that even the most stellar performance has an air of cliché.

“He Really Makes It Hard For Me To Sing The Blues” findings Howard taking a delicious R&B backbeat and a rocking attitude and blowing it right out the top.  The band gets to stretch a bit here, with Ed Moed breaking out the mellotron and Bennett rocking the guitar.  The rhythm section of Chris Ciampa (bass) and Gregg “The Governor” Peirson (drums) drive this baby, however, laying down rhythms that are savage yet refined.  Howard takes “Body And Soul” on her knee and makes it her own, inhabiting the song the way a great actor inhabits a role.  We get to hear a bit of Howard’s softer side here, and she navigates the quieter moments as adeptly as she wails on wilder songs.  “Lost Mind” plays on Howard’s dual advantage of great vocals and comic pastiche, and she vamps it all up with a wink and a smile.  Howard says goodnight with “One for My Baby (And One More for The Road)”, once again showing her softer side with a lyric vocal that’s absolutely sublime.  Even in the moment’s where Howard’s rougher edge shows through, her unique sound and style make for a classic performance.

Eileen Howard sings like a Diva, vamps like a Rat-Pack veteran and generally entertains like few others can on Blues in the Green Room. Making her case to be considered one of the great torch singers of her generation, Howard is in a league of her own here.  Her interpretations of the American Songbook are nonpareil.  The audience on the live recording is obviously receptive, and Howard’s backing band could walk onto any stage, anywhere and be allowed to play whatever they want.  They’re that good.  But Howard is one of a kind.

Learn more at www.singouteileen.com.
Posted by Unknown at 7:29 AM