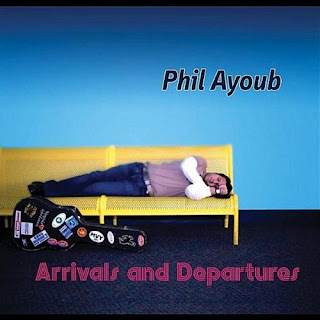 Boston-based singer/songwriter Phil Ayoub created a lot of buzz with his last album, Schoolbus Window Paper Heart, earning airplay on over sixty radio stations across the US and playing live shows from coast to coast. With a mild musical manner but an intensely infectious joy in his craft, Ayoub tells unvarnished stories in often mellow but moving musical arrangements that get under your skin. Ayoub's latest album, Arrivals and Departures picks up with he left off. Filled with 14 songs of finely crafted singer/songwriter tunes that run the gamut from Americana to folk to rock n roll, Arrivals And Departures features several songs that could help Ayoub make the jump to the next level of name recognition. Arrivals And Departures was primarily written while traveling, often while waiting in airports for a flight. The album is produced by Tim Bradshaw (John Mayer, David Gray) and features drum work from Kevin Figueiredo (Extreme).

Ayoub kicks things off with "The Bearded Lady", comparing the draw of an unhealthy relationship with that of a circus act; a situation where you can't look but you can't look away. This is delivered in a very catchy Americana arrangement laced with the sort of pop hooks that capture music directors' imaginations. "Get Out (Live A Little, Love A Lot)" is all about living life to the fullest. Ayoub wraps this tune in an irresistible piece of music you can't help but love. It's easy to see how "Get Out" could become a fan/concert favorite; the song is ripe for treatment as a single and has potential licensing opportunities that seem limitless (particularly in the health lifestyle category). "Flowers At Work" shows Ayoub's romantic side; express as a penchant for kitschy little love songs that have a Paul McCartney flair. The song also shows Ayoub's ability to craft gently perfect arrangements that put the listener instantly at ease and draw you into whatever story he's telling.

Ayoub has a bit of fun with "Body Language", a catchy tune about methods of communication that (usually) need no common language. "Bad Habits" is a tongue-in-cheek rocker that engages in a bit of post-adolescent bravado in a message to all of the ladies listening. It's another tune that keeps a mellow mood but simultaneously delivers a catchy melody you can't quite escape. Things get a little darker on "Goodnight Romeo", a song about dealing with the loss of a loved one by sinking into one's darker, self-destructive tendencies. There's a desperate feel to this song that is palpable as Ayoub delivers this vignette on emotional pain in the mild, unflinching tones of the deeply depressed. At the same time it's a pretty melody, and the song is imbued with a lively energy that somehow avoids being at odds with the subject matter.

"Tara's Birthday" is a musical cat scan of sorts, looking at slices of one woman's life as seen through her own eyes on various birthdays. The song is incredibly charming with a sort of detached melancholy as it tells the story of an eternally single woman as she tries to come to terms with who she is. It's incredibly well written and ultimately tuneful. "Walk You Home" is a sweet, uncomplicated love song with a pretty melody and a low-key approach that sets the stage for the album's best track. "32 Memory Lane" might have Paul McCartney's lawyers checking his song list to make sure Ayoub didn't somehow lift this track from the archives. Catchy, quirky and sweet;”32 Memory Lane" is among Ayoub's best songwriting and is guaranteed to be rattling around inside your brain for weeks.

Phil Ayoub keeps impressing people. Whether fronting his former band Riverside Train or as a solo artist, Ayoub doesn't seem like the consummate front man. His easy going style would seem at odds with the dynamics of a rock n roll star, but Ayoub delivers each song with a quiet internal intensity that brings the moments, places and people he tells about to life before your eyes. Add to that a penchant for creating melodies and arrangements that captivate the mind and you have a distinctive recipe for success. Arrivals And Departures perhaps doesn't hit on every song, but the material that hits home is so well crafted and performed you won't want to put the album down. Arrivals And Departures is an essential album from an artist who is only getting better and better with time.

Learn more about Phil Ayoub at http://www.philayoub.com/ or www.myspace.com/philayoub.  Arrivals And Departures is available as a CD

from Amazon.com.  The album is also available digitally from iTunes.
Posted by Wildy at 5:10 AM