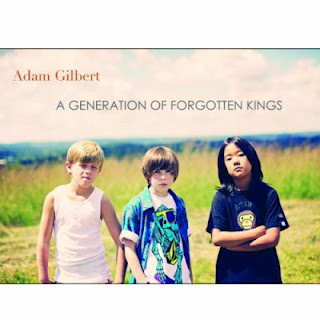 Adam Gilbert – A Generation of Forgotten Kings
2012, Adam Gilbert
New Jersey native Adam Gilbert has been pursuing the life of a piano man since graduating from the University of Miami in 2004.  His 2007 album Fishing For Water won wave reviews and resulted in significant airplay across the U.S.   For his latest work, Gilbert dug deep for the authentic, honest sound that issues forth from A Generation of Forgotten Kings.  The process was a personal one for Gilbert, as he strove to expose ideas of spirituality, accountability, responsibility, love and grace.
Gilbert jumps right in with the title track.  “A Generation of Forgotten Kings” is catchy, and built against a grand sonic landscape, ala U2.  Gilbert’s voice is certainly an acquired taste, although if you’re into early Bowie you’ll dig his sound.  The song focuses on stewardship, and asks what will happen to the children of today.  “How Do We Respond” plays in the same sonic playground, but the effect is a bit more bland here.  The chorus lingers on too long, and while the sound is nice, there’s no emotional oomph to back the message.  “On A Hill” plays in the same vein.


“Steady As We Go” is a solid piano ballad.  Gilbert breaks out of the U2 mold and writes an inspired song about holding on and staying the course.  Gilbert’s piano style on this tune may remind you of early Billy Joel.  “A Little Emotion” is best described as an amalgam of Billy Joel and David Bowie.  Although the songwriting here is diffuse, the overall sound works well, and Gilbert’s gruff voice will definitely grow on you.  “We’re Accountable” uses an almost hyper baroque piano style to back up a lyric ballad about personal responsibility for the world around us.  Gilbert’s against the grain voice is a nice fit here, and the sonic build throughout the song is appealing.  Lyrically, the song is a bit ham-handed in handling its subject, but it gets the desired message across.
“This Old World” is a love ballad with spiritual/religious undertones.  It’s a fair effort, but is the beginning of a long slow decline for A Generation of Forgotten Kings.  In general, the final six songs on the album aren’t really ready for prime time.  Gilbert works his way through “Better”, “Do You Want Me Now” and “I’ll Hold You In My Arms” like he’s going through the proverbial motions.    He shows a mild recovery for “Stay Awhile”, but slips back into the doldrums with the closing track, “Listen”.


Adam Gilbert starts with great intentions on A Generation of Forgotten Kings.  It’s the intentions that get him.  Gilbert spends the entire album writing to the message he wants to convey, rather than writing music and allowing his message to be born of it.  The result is similar to what often happens with CCM music… the message overcomes the musicality of the songs, and end product often sounds awkward.  Gilbert shows some real potential on the first half of the album, and a six or seven song EP made up from the first half of the album would find much greater success.  Gilbert is one to watch however, as he can write quite well.  He just gets stuck trying to write heart messages with his head on A Generation of Forgotten Kings.
Rating: 2.5 Stars (Out of 5)


Learn more at www.adamgilbertmusic.com.
Posted by Wildy at 3:03 AM