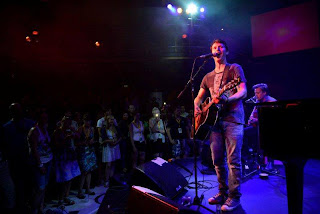 James Blunt - Bonfire Heart
I have kind of an interesting history with James Blunt; that is to say, none.  I've heard songs of his on the radio in the past but never paid much attention to him.  His voice is certainly distinctive; an acquired taste but memorable.  The early singles I heard from him seemed a bit derivative.  He was being marketed in the same vein as artists such as Dave Matthews and John Mayer, neither of whom is a particular personal favorite.

"Bonfire Heart" is quite different in tone and tenor, however.  While it's difficult to judge from just one song, it sounds as if Blunt has found himself musically.  The same distinctive sound and approach to songwriting are here, but there's an irresistible pop sensibility at the core of "Bonfire Heart", and it sounds like Blunt is actually having fun.  The string-laden arrangement helps to contain the vibrant energy of the song, giving it the feeling of a pent up love about to burst.

"Bonfire Heart" debuted on BBC Radio 2 this morning, and is the first single from Blunt's forthcoming album, Moon Landing (October 2013).  Don't be surprised if it turns into a major summer hit on both sides of the pond.

Learn more at www.jamesblunt.com.
Posted by Wildy at 7:50 AM No comments: 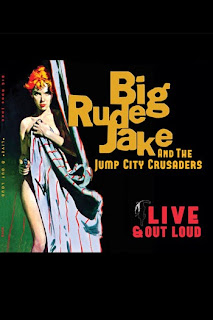 
Big Rude Jake was on the fast track.  He had moved from Toronto to New York City, and self-titled album was on a major American label.  As so often happens, the label didn’t live up to its end of the bargain.  The year was 2000.  Jake went on the release Live Faust, Die Jung, but a car accident sidelined him from touring.  Jake dropped out of the music scene for a time, returning eventually under a pseudonym as he fully explored his love for the fingerpicking style used in Ragtime music.  It wasn’t long before Big Rude Jake was back as himself, however.  Last fall, Jake released Live & Out Loud, his sixth album, with The Jump City Crusaders.  It was a shot across the bow to a music industry that had grown tired with formula and repetition.


Live & Out Loud opens with "Steppin' Out Under The Moon", a hard-edged, talk/sing monologue with a killer chorus. This is classic Jake, supplemented by a lethal horn section with ill intentions.   The solos in the breakdown are intense and vibrant, and Jake's voice is as enigmatic as ever. "Preacher's Got. A Brother" is a fun tune about the libidinous desires a preacher instills in his female parishioners, and about the preacher's brother who isn't cut from the same cloth. Jake sells the story for all he's worth, and The Jump City Crusaders surround the storyteller with an arrangement that's absolutely electric.  Jake and company keep then energy high on "Avenue Blue", even with a more traditional Boogie Jazz vocal style.


"I'm Shakin'" walks the fine line between early rock and roll and Louis Primary style Vegas jazz. The transformation continues with "Walking Blues (Walk Right In)", a not so subtle bit of innuendo and rhyme set to a smoking small ensemble jazz arrangement.   Big Rude Jake dusts off "Lilly Christine" in a rendition as needful and sharp as the original. "Blue Pariah" is a galloping bit of fun, with Jake and his posse barreling headlong into delicious blues inflected rock and roll.


The band takes a breather while Jake croons "The Ladies Man", telling the tale of a romantic drifter. This is one of the mellower moments on the album. This is a nice moment, and Jake maintains the atmosphere with a viciously reserved mambo in the form of "Mambo Cafe", before throwing down with the raucous pace of "The Jelly Song".  Big Rude Jake closes Live & Out Loud with “Magpie", delivering the fan favorite with style and panache. The recording includes an entertaining intro that explains how the song came to be.


The music world is full of influencers and sound-a-likes.  The true originals are a rare commodity.  Big Rude Jake is just such a human being.  Live & Out Loud span’s Jake’s career both song-wise and stylistically.  It was the first of three new projects released over approximately eight months, and it is a testament to the Jake’s love of classic American music, and his ability to take it to new heights in his own inimitable style.  Live & Out Loud is a classic.


Learn more at www.bigrudejake.ca.
Posted by Wildy at 6:00 AM 1 comment: