Stark - Race To The Floor 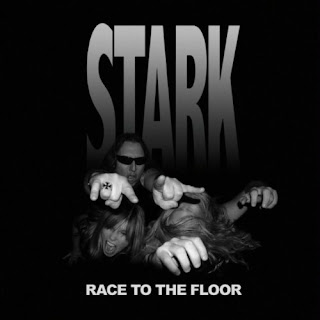 Stark - Race To The Floor
2010, Kicking And Screaming Music

New York City hard rock trio Stark return in 2010 with their meatiest record to date, Race To The Floor. Vocalist Lani Ford leads the band through a highly energetic and dynamic collection of songs with Joe Hogan shredding away on guitar and Eric Robel beating the skins. We reviewed Stark's sophomore album, Put It In Your Head in 2008, and the progress from that record is notable. With Race To The Floor, Stark sticks to their 1970's rock roots but adds more punch and fire to their sound.

Race To The Floor kicks off with "Stark", a driving rocker about walking the edge of sanity. Built on a powerful hook and memorable chorus, Stark certainly raises the bar early. "Get It" is a driven, post-punk brush off song. Knowingly or otherwise, Stark invokes and old Danny Kaye routine "Get it? Got It. Good!" in what may turn out to be an anthem for ladies night in New York City (and beyond). Ford and company pay sonic tribute to Kin Deal and The Breeders with "Getting Along", contrasting Ford's urgent vocal style with the melodic guitar work of Joe Hogan. At times on tunes like this Ford pushes a bit too hard and the result is that her pitch suffers once in a while. The befuddling part of this is that Ford sounds powerful enough even she doesn't push so hard.

"Wasting Air" is a song of heartbreak that transforms into an angry romp. Musically the song is solid, but the premise and transition seem a bit calculated. Ford is angry, frightened and reckless on the unsettled "Drunkaholic", once again walking along the edge and stumbling into dangerous ground. Stark takes a middling path for a few songs but closes strongly with "Puttin' Out Your Fire", an angry kiss of song that's a lot of fun. Ford gets a bit carried away with the vocals here; an approach that you could imagine working well late in the set in a crowded bar, but here simply lays bare the limitations of her voice.

Going to the studio can always be a risky proposition for a band that does really well live. The approach is different. Even capturing the "live sound" in-studio calls for a different approach than you might take on stage. Some bands/vocalists have a hard time with the transition. Lani Ford appears to struggle a bit with the transition at times on Race To The Floor, although much of the album is very well crafted. There are times when less is more, and there are ways to get the sound Stark seeks without blowing out your vocal chords in the studio. Stark is a very solid outfit (guitarist Joe Hogan is exceptional). Lani Ford is a personality with a powerful voice who can own the stage, but occasionally defeats herself by pushing a bit too hard. Even so, Stark and Ford mostly overcome this tendency to offer up a solid album in Race To The Floor. Stark, however, remains one of those bands where you don't get the full experience unless they are on stage.

.  You can also find the album in multiple formats from CDBaby.com, and digitially from iTunes.