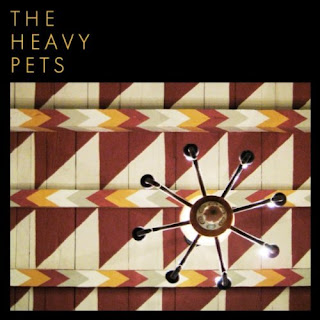 Fort Lauderdale, Florida's The Heavy Pets are stylistic chameleons, blending sounds and styles seemingly without thought. The band seems to have an innate melodic sensibility that allows almost anything to work for them, a characteristic abundantly display on The Heavy Pets, the band's self-titled third album. Sounding like something a jam session between Supertramp, Train and John Mayer, "Drenched" kicks off the album in fine style with a funky feel and soulful vocals. The song is catchy and laid back all at once; a monologue from a man trapped in sadness but seeing the light in a particular lady. It's a great opening track and likely single. "Girl You Make Me Stupid" features a rapid-fire vocal/lyrical style and is highly danceable with a hip-hop feel. It's a look at the inept feeling of being a fool in love and explores how it carries over once the relationship has passed away.

For those familiar with Canadian rockers Max Webster, you'll swear "How Would I" has to be a cover of some undisclosed tune. We assure it's an original, but the guitar work sounds a lot like Kim Mitchell riffing on a theme. It's another highly catchy tune and the vocal harmonies here are outstanding. From here the 1970's take over for "Grace Blix" and "Jackie Bones"; the former an off-beat ballad and the later a guitar oriented classic rock tune that makes for a solid album track. "Lazy Anna" gets stuck in its own monotony, playing like a rap tune with rhythmic and a-melodic vocals on the verses. Things even out for the rest of the album somewhere at the midline. Over the final six songs The Heavy Pets move through solid classic-rock oriented musical blends that are enjoyable listens but don't have the vitality of the first three tracks. "No More Time" stands out here for its pleasant reggae/rock/Americana blend, and "Ichabod Train" makes a nice closer with its folky feel.

The Heavy Pets put in a solid effort on their self-titled album. The only problem is more one of perception. The Heavy Pets starts out so strongly that the rest of the album is something of a letdown by comparison. To be fair, much of this album will likely play better live than in the studio, and perhaps some of the letdown referenced above should be laid at the foot of the production board. It's clear that The Heavy Pets have a knack for writing dynamic and listenable rock music; this is a band to keep your eyes on.