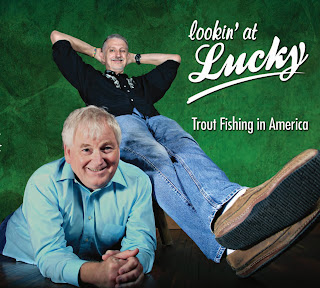 For over thirty years Trout Fishing In America has been bringing their delicious blend of styles and sounds to families of all ages. Keith Grimwood (bass/vocals) and Ezra Idlet (guitar/vocals/ukelele/bouzuki/percussion) have a special chemistry they bring to the recording studio and stage, regardless of whether they are singing for children, families or adults. The four-time GRAMMY Award nominated duo spend a lot of their time performing for children and families, but they started out playing rock and roll music for adults in the Houston, Texas band St. Elmo's Fire in the 1970's. Grimwood (5'5 1/2") and Idlet (6'9") might appear to yang and yin when you see them, but together they form a complete whole that blends music, humor and heart in ways that recall another era of music. On September 28, 2010, Trout Fishing In America returns with their first adult music album in eleven years. Lookin' At Lucky is Trout Fishing In America's most mature work to date. Sprinkled with the trademark humor that has made the band such a success across generations, features sublime songwriting and the sort of musical chemistry that takes thirty years and a little bit of magic to build.

Trout Fishing In America opens with the title track. "Lookin' At Lucky" is a love song that focuses on how the right person can make you feel. It's a brilliant take on love; light-hearted and yet full of real emotion in the best Trout tradition. The melody is one that will stay with you, and the folk/country arrangement is a perfect fit. "She's The Only Smile" is about the serendipity of finding the perfect person, even if just for a dance. There's a youthful exuberance in the song tempered by the wisdom that recognizes magic when it happens. "Bettin' That It Won't" is a delicious mix of cynicism and hope reflected in a classic folk/rock arrangement. It's the sort of song that most anyone can identify with; universal in appeal and understanding.

Keith Grimwood takes over lead vocals for "Home", a confidently hopeful tune about love and its eventuality. The picture here is not of someone pining for love, but of one who knows it will come and is willing to wait. "Home" features a graceful melody, and Grimwood has a voice that's pleasant and sweet. Ezra Idlet offers a lesson about the grass being greener on "Safer Haven". The protagonist of the song leaves southern California to escape earthquakes only to find himself in Oklahoma and in the path of a tornado. Next up is the Carolina coast and hurricane season and ultimately a volcano in the northwest. All the while Idlet is just looking to survive, "asking for a little slice of heaven while holding off eternity". In the end Arizona is a safe place to land, even with speculations about killer bees in the air. It's songs like this that make you realize the value of what Trout Fishing In America does. Perhaps it comes from the years playing shows for kids, but Grimwood and Idlet have a story-telling style sprinkled with good humor that smacks of folks like Johnny Horton, Arlo Guthrie and yes, even Bob Dylan.

"Drivin' Rain" may be the most intriguing track on "Lookin' At Lucky"; a breakup song with elements of rock, soul and funk but driven by inventive banjo soloing courtesy of Idlet. It's a catchy tune; and one that could cross a lot of musical boundaries. There was a time not too long ago when this could easily have forced its way onto both the rock and country charts. "Who Knows What We Might Do" is a charmer that explores the inverse properties of aging, taking aim at the old "act your age" argument in sweet and funny fashion ("acting your age is getting harder and harder to do when the age that you're feeling inside's more the size of your shoe"). Keith Grimwood is perfectly at home in a moment touching, funny and genuine. Well-age loved is the theme of "Not Every Dream", exploring the gentle pleasures of a relationship that is as comfortable as a second skin yet as vital as when it was new. It's a song about deep connections and the sustaining power of love, and is Idlet's most affecting vocal performance on the album.

Grimwood offers up a gently humorous look at the tendency toward little memory lapses as we age in "The Car's Running", lamenting his inability to find the keys to the house while the car is running and other little memory gaffes that comes to us all in time. Trout Fishing In America resurrect "How Many Times A Fool" as a folkgrass number that's introspective and full of a detached sorrow. The original version, appearing on 1991's Over The Limit, was a more folk/rock oriented turn full of fresh anger and self-recrimination. This is a great update that shows how the passage of time heals wounds even if they never fully go away. "I Pretend To Understand" offers a great coping mechanism for being overwhelmed with too much information that works no matter how old you are. It's a cute tune set in a funky/slinky folk arrangement that reflects the "just getting along" theme reflected in the lyrics. Trout Fishing In America returns to their distinctive blending of folk and bluegrass for the closing number "My Baby Loves Sudoku". It's the anthem of a Sudoku widower who can't compete with the addictive power of the game.

Sometimes we forget about people's power to transform themselves. Trout Fishing In America have had a tremendous run over the past three decades primarily as a children's act, occasionally sprinkling in an album ostensibly for the adults. While the awards have most come for their children's work, Keith Grimwood and Ezra Idlet have always been masterful songwriters no matter who they were writing for. Yet Lookin' At Lucky would seem to mark an artistic zenith for the duo, displaying a maturity and grace that has always been integral to their act but at a much more refined level than in the past. Trout Fishing In America will charm you with Lookin' At Lucky. You'll laugh; you'll feel and you'll walk away seeing the world in brighter hues. Lookin' At Lucky is by far a Wildy's World Certified Desert Island Disc.

Yes, I'll own that one. I've updated the review. A clear case of accidental reverse thrusters.