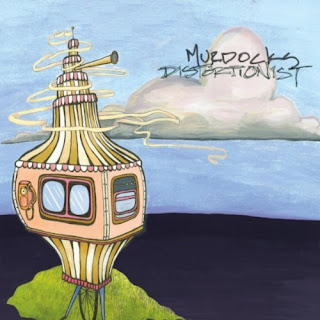 Austin, Texas rockers The Murdocks view life from the edge on their latest album, Distortionist, with songs written in the midst of unemployment, divorce and listless decline. Not so much an album of anger as outrage, Distortionist explores the psyche of those who have not only failed in their expectations but been pushed well beyond their own understanding of what life is supposed to be. The result is a catchy, frustrated and occasionally even funny look at how life sometimes seems to pile on the consequences of decisions we don't even realize we made.

Distortionist is an interesting take on alternative rock with emo aspirations. Vocalist Franklin Morris has a voice people will clamor for when taking a more lyric path, but can scream with the best of them. The Murdocks show real pop sensibility on songs such as "OMG", "Bloodsicle", "Spirit Of '95" and "Sleepy Queen & Charlie Brown". The blend of low-fi punk with distinctive pop sensibility isn't new, but the Murdocks seem to have a real flair for bringing out the best of each style in songs that will make you want to dance even if you're not normally so inclined. There's a lot to like here even in the more complicated efforts such as "Black Jesus Knocking" and "Playhouse Down". The Murdocks even take some risks, such as mature outlook of "Aborted Baby Summers" and the nearly experimental "Infinite Pansy". Even the closing track, "Widower" finds the Murdocks striving to break the mold with a swaying one-sided dialogue over infidelity.

At the end of the day Distortionist is the sort of album you don't have to think about if you don't want to. The Murdocks provide more than enough energy and movement across the fifteen songs offered up here. What's nice is that if you want to do more than just move to the music, The Murdocks provide more than enough depth to their nascent post-punk pop to keep you interested beyond the third spin and looking for what they might offer up next. Pop stylings with a real edge are never a bad way to go in popular music. The Murdocks show that propensity on Distortionist as well as the sort of creative ingenuity that tends to age well.

Learn more about The Murdocks at http://www.the-murdocks.com/ or www.myspace.com/murdocks. Distortionist can be ordered in multiple formats and even format bundles from The Murdocks' webstore.  You can find digital copies through such e-retailers as Amazon.com and iTunes.