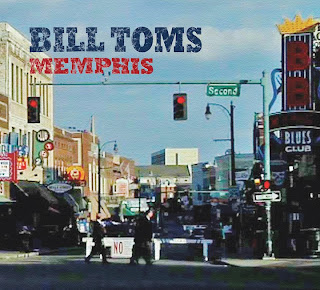 Bill Toms - Memphis
2011, Terraplane Records
From 1987 until 2006, Bill Toms was the lead guitarist and backup vocalist for Joe Gruschecky and The Houserockers, a legendary Pittsburgh band that broke into the big time.      The band’s breakthrough effort, 1995’s American Babylon, was produced by no less than Bruce Springsteen himself.  Along the way, Tom had the opportunity to play with or open for the likes of Springsteen, Bob Dylan, The Band, Little Feat and Stevie Ray Vaughan.  As a solo performer, Tom’s is a refined street poet, mining the waters of rock and rhythm and blues for hope while growling from the heart of human mischance and sorrow.  Bill Toms’ eighth solo release, Memphis, is due on September 13, 2011.
Memphis opens with "I Won't Go To Memphis", a hard-core acoustic blues/rocker that excels on pure chutzpah.  Toms brings a big, gruff voice and likable demeanor, falling naturally into the role of entertainer.  "Colleen, Goodbye" is a Bruce Springsteen-style story song about two lovers doomed to be apart.  Toms creates a bleak atmosphere against either an honest reckoning of the future of a relationship, or the tried and true departure of a man who refuses to be tied down.  "Misery" is an appealing bit of acoustic blues cast in an enjoyable arrangement capped off by brilliant sax.  The sound gets a bit bland on "On The Road Of Freedom", a 60's style folk rocker with decent energy in the instruments but where the vocal just doesn't keep up.
Toms settles in to story-teller mode in the middle of album, running the gamut from folk to blues to rock nm roll.  Even gospel gets into the act on "Somebody Help Me" and "I'm Getting Closer".  "Lord Don't Take Me Now" is a periodically muscular blues rocker with big commercial appeal than transitions into the folksy balladeering of "Hold On".  The blues works its way into the song's roots here just as faith works its way into the lyrics.  Memphis winds down with the idealistic 1960's pop of "Let's Make A Better World".  The lyrical composition here is a bit awkward; a case where the message became more important than cogent construction, but the song is sonically appealing and carries a positive message.
Bill Toms uses charisma, charm and a sense of musical theatrics that's on the mark more often than not to make Memphis an appealing and enjoyable record.  The album is a bit uneven as it plays through, with Toms occasionally missing the bar here or there, but the overall effect is positive. Memphis is certainly worth making time for.

Learn more about Bill Toms at www.billtoms.com or www.myspace.com/billtoms.  Memphis drops on September 13, 2011.  You can pre-order the CD from Amazon.com.
Posted by Wildy at 5:00 AM