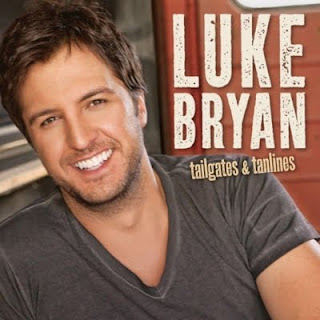 
Leesburg, Georgia native Luke Bryan is a rising star in the country music world.  With three top-ten albums and 6 top-ten country singles in four years (including to #1 hits), Bryan is living the Nashville dream.  His latest album, Tailgates Tanlines, debuted at #1 on the U.S. Country charts and #2 on the Billboard album chart.


Tailgates & Tanlines opens with "Country Girl (Shake It For Me)", a catchy country/rock anthem that's likely to be a live favorite. Bryan shows real pop sensibility here, and his backing band is top notch. "Kiss Tomorrow Goodbye" is a solid, middle of the road country number about saying goodbye to a purely physical relationship in the only appropriate fashion. "Drunk On You" is a radio friendly love song that would make for a great summer single. "Too Damn Young" recalls young love with great simple poetry and reminiscences of a time when a single kiss meant everything.


"You Don't Know Jack" explores the depth of hopelessness that can lead a man with everything to lose to the bottle and to the streets. Bryan offers an interesting perspective, bringing a sort of nobility to those often viewed as untouchables. "Harvest Time" is a solid country anthem paying tribute to small time farmers and the work they do to feed the world. The high point of the album is "Muckalee Creek Water", a number about getting away from it all, backwoods style. Bryan opens up his vocal range here a bit with pleasant results, and the song is catchy enough and raw enough to stick in your mind. Bryan works his way to "I Knew You That Way", a reminiscent love song that avoids melancholy by the narrowest of margins. It's an honest look at what was and what is; well written and from the heart.


Luke Bryan shows flashes of insight and contemplative rural poetry on Tailgates & Tanlines, and has some good old fashion country fun along the way too. Bryan's sound is modern and radio friendly, but there's enough depth here to make his songs interesting. Vocally, Luke Bryan is a solid performer who can hold his own among the CMT crowd, and Tailgates & Tanlines should solidify his status as a headline country artist.


Learn more about Luke Bryan at www.lukebryan.com or www.myspace.com/lukebryan.  Tailgates & Tanlines is available from Amazon.com as a CD or Download.  The album is also available via iTunes.
Posted by Wildy at 5:00 AM