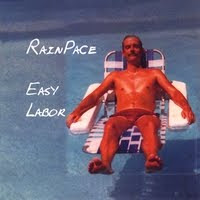 RainPace is a Los Angeles based collective of actors, singers, comedians and all-around musicians. Two-thirds of the musical/comedy act Changing Lanes (Kerry Phillips and Valerie Tullous) are here, as well Robert Briscoe Evans, Mike Hunter and Michael Salas. Phillips was a writer for Showtime’s Deep Fried TV and has starred with Peter Billingsley (Messy Marvin, A Christmas Story) in Who’s Watching Me. Tullous is an Award-winning stage actress and a pretty mean singer (check out the part in her bio about homicidal ideation). Robert Brisco “Good Friend Bob” Evans is a major stage actor in Los Angeles, and has had a host of small to mid-size roles on TV and in movies (What Women Want, Best Little Whorehouse In Texas, Who’s The Boss, Caroline In The City, Ally McBeal). Mike Hunter is a longtime session player for A&M Records and was a childhood actor and model who spent two years touring the country with a mysterious and unnamed punk band (we dug but couldn’t find out whom). Michael Salas has played with numerous bands including Grupo America, The Tri Angels, 818 and The Pirates. As RainPace, the group is ready to release their latest storm of creation, known as Easy Labor.

Easy Labor opens with With Your Permission, a quirky folk duet that quickly grows into an ensemble vocal piece with a wicked sense of humor. The musicianship and vocals here are flawless with a down-home Country/Americana flavor that can't miss. Mood Wonderful Mood sounds like The Manhattan Transfer singing material from A William Finn musical. The song is incredibly lyrically dense; you almost need to stop the disc from time to time just to keep up with all the thoughts and ideas thrown your way. It's a great listen. Easy Labor is a melodic morality tale told ala Greek Chorus about taking the path of least resistance. I D'Wanna Do It is an amusing song about life's greatest ambition for someone who's done it all.

Oliver Thom renews the William Finn comparison, a biograph in song for a songwriter who never grew into his outlook. It's a charming tune with harmonies that are to die for. Sittin' Around sounds like an alternative take on I D'Wanna Do and is probably a great euphemism for the "this is your brain on drugs" commercials from the 1990's. Easy Labor closes with At The Big Table, a song about coming home and family with all the quirks and dysfunction that grease the wheels of love. There's a Crosby Stills & Nash feel to the harmonies on this one, and the arrangement is solid Americana. This is perhaps the best song on the disc; I wouldn't be surprised to find this one licensed for films or even better, I wouldn't be surprised to hear this as part of a stage show.

RainPace match musicianship, harmonies, songwriting and humor in an explosive package of songs that you simply can't ignore. There's a high dramatic sense to the music on Easy Labor; imagine if Shakespeare were still writing his farces in today's vernacular and had a penchant for folksy music. This is the sort of stuff he might come up with. Easy Labor is going to be a bit hokey to some readers, but it mixes elements of classic old-style family entertainment with strong songwriting and musicianship. You can't go wrong with an album like this.

You can learn more about RainPace at http://www.rainpace.com/. You can purchase a copy of Easy Labor at CDBaby.com.
Posted by Wildy at 6:16 AM

Thanks. I like to listen to 'off the well-beaten path' music that is performed well. Will check this out!