Review: Mower/Slower - Make It A Double 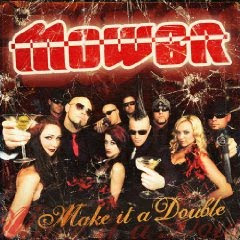 Mower/Slower - Make It A Double
2009, Suburban Noize Records
San Diego's Mower is a fixture on the Southern California Punk scene, mixing humorous, sarcastic and intelligent lyrics with some of the bruising hard rock you'll find. Slower is the alter-ego of Mower, a Trippy Jazz/Lounge act that reinterprets Mower songs as Lounge classics. Both personae are on display on Make It A Double, Mower's most recent album, which features nine new Punk originals and six Lounge reinterpretations of Mower songs. With guest appearances from Rob Caggiano (Anthrax), Mikey Doling (Snot), Roy Mayorga (Stone Sour) and Fernando Apodaca (Mad Juana), and production from Eddie Wohl (Anthrax, Dry Kill Logic, 36 Crazyfists), long time fans are sure to be pleased with the sound of the originals while Make It A Double opens the doors to a whole new fan base.

Make It A Double opens with The Party, a shot across the bow of Hollywood's excess and celebrity-soaked society. The song rocks like nobody's business and calls out the Celeberati in no uncertain terms. Mower attacks the social structure of American society on Wolves, bemoaning the fact that power brokers rob, cheat and steal to become richer while children go hungry. The anger here is real and representative of the questions being asked by a new generation of people all around the world right now. Shneak is built around a filthy guitar riff I wish I had thought of and paints a picture of the sort of friend nobody needs. The Song We Don't Speak Of follows the South Park credo of offending everyone as it takes a shot at pretty much every major religious belief system you can name. People of faith will hear this song as sacrilege, although the humorous approach of the song would suggest it's aimed more at the hypocrisy of some of the faithful rather than the beliefs themselves. Sicko takes a speed-metal axe to the current state of the healthcare system by showing how the Hippocratic Oath can be twisted to invert its stated purpose.
Mower begins its Slower metamorphosis with the straight-forward Funk/Rock tune Faded. The musicality of the band is plainly on display here; stripped of serious amplification, distortion and screams. The respect I had already developed for the band simply grew as the album progressed, particularly hearing what might be termed some sweet harmonies here. Road Rage plays like an Alt-Rock gem; Mower/Slower could have a major hit on their hands with this one. The utter power of the bass line on Pieces becomes even clearer in this acoustic draw down; serving as an equal partner with vocalists Brian Sheerin and Dominic Moscatello. The harmonies on Pieces are as sweet as honey while retaining a minor-key edge that makes you wish they would just keep singing. Undone takes on a social justice leaning in addressing the power of government and society to restrict people's ideas and actions through both direct and indirect means. U Turn gives bassist Chris McCredie another chance to show off, giving the song a rhythmic life that is picked up by the other instruments and the vocalists and carried throughout. Shut Up And Skate completes the transition, as Mower has turned completely into Slower, an ultra-hip Punk/Jazz outfit on good behavior (barely). The guitar work of Greg Russell is particularly notable here as he provides fills and frills that complete the sonic texture of the song. Mower returns for a brief untitled epilogue that reprises the Aliens concept while reminding listeners that the rock isn't gone.

Mower brings a distinctive mix of sounds on Make It A Double. The humor and wit of the band are matched by the intelligent and compelling ideas they put forth in their songs and the serious musicality they bring to the table. Make It A Double is the best Punk/Metal album of 2009 (so far), and the acoustic/lounge treatment of some of their best known songs is a real treat. Mower works as a Punk act because when you strip them down to their most basic elements this is one incredibly talented band. If you like to bang your head with the best AND swing with the cool cats, then Mower/Slower is for you. Make It A Double is an essential listen, a Wildy's World Certified Desert Island Disc. Get it. Now.

You can learn more about Mower at http://www.mowermusic.com/ or www.myspace.com/mower. You can purchase a copy of Make It A Double at Amazon.com, or you can download the album from iTunes.
Posted by Wildy at 5:20 AM