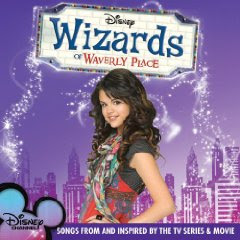 Series star Selena Gomez has four songs on the soundtrack. Opening with Disappear, a highly produced bit of Pop fluff, Gomez displays a strong, pleasant voice amidst heavy hooks. This is a legitimate Pop hit outside of the teeny bopper set the show is aimed at. Magical is another legitimate Pop hit. Gomez shows off a lot of texture in her voice here and a quirky side that is endearing. Up next is a cover of Pilot’s Magic that’s updated for today’s Pop sound. I can’t say I’m a big fan of this version but it isn’t too far off the mark. The other Gomez track is the series theme song, Everything Is Not As It Seems. If you listen to any sort of Pop radio you already know this one.

Up next is Steve Rushton covering Jeff Lynne/Electric Light Orchestra’s Strange Magic in a faithful cover with incredibly harmonies. This was my favorite cover on the disc, and Rushton shows real talent as a vocalist. Honor Society takes on The Cars’ Magic and loses in a Karaoke club bit of blandness. The vocalist here just doesn’t have the panache or quirk of Ric Ocasek and ends up sounding mechanical. Mitchel Musso digs into The Police’s Every Little Thing She Does Is Magic to much the same effect found on the previous track. The vocalist displays little personality and is so ensconced in vocal effects and pitch correction software we may never know what his voice really sounds like. This rendition is bland in spite of the upbeat chorus. KSM gives a fair rendition of Steppenwolf’s Magic Carpet Ride, providing enough attitude and oomph to make the song believable and fair harmonies to boot.

Meaghan Martin draws Olivia Newton-John’s Magic and delivers a flat, highly-processed reading that simply doesn’t work. The energy and vitality of the original make this unlistenable by comparison. Andrew Seeley (of High School Musical fame) takes on America’s You Can Do Magic in a version designed and produced to do well on Pop Radio. There are more vocal effects here than you can wrap your head around in a re-envisioned Pop/Dance package. Raven Symone chips in with Some Call It Magic, a decent but not highly memorable pop tune that will likely play well on Radio Disney and not elsewhere. Aly & AJ hit gold covering The Lovin’ Spoonful’s Do You Believe In Magic. There has always been something of a bubblegum quality to this song, and that spirit isn’t lost here, but the vocalists have wonderfully textured voices that highlight the duality of the song. While vocal effects are probably endemic on anything Disney touches, the voices of Aly & AJ sound like they might just be real, and the energy here is high.

Wizards Of Waverly Place is a mixed bag. Highlights include Aly & AJ, Andrew Seeley, Steve Rushton and the irrepressible Selena Gomez. The choice of including covers of classic songs either soars or crashes and burns, depending on the artist/song. Some of the artists included here just don’t have the voice or personality (either that or it’s been produced out of them) to carry the songs they’ve been assigned. The album will do very well with the Radio Disney set, and some of the songs are legitimate Pop tunes that will do well on commercial radio. This is one of those albums where the ability to download just the songs you want may be advantageous.

thanks for sharing, i also have a good stuff from which you can Watch Wizards of Waverly Place Episodes Online and also you can get more information about any other shows which you want...