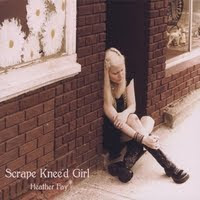 Heather Fay - Scrape Knee'd Girl
2009, Heather Fay Dawson
Bridgeport, Connecticut's Heather Fay started out with the dream of creating the perfect mix tape. The implausibility of this quest didn't hit her until years later while looking at her Alvarez acoustic and realizing that if she wanted the perfect mix tape she'd have to write some of it herself. Scrape Knee'd Girl is the outgrowth of that realization; an album of songs about the imperfections and wrong turns on life's path and the emotional cost of living through both right and wrong decisions. The title and artwork represent the "perfectly imperfect" state we live in, the bumps and bruises we acquire, and the tales Fay spins on Scrape Knee'd Girl sing to the very part in each of us that crave to be accepted, warts and all.

Heather Fay dabbles in the singer/songwriter pastiche of Carly Simon and Joni Mitchell and adds in a twist of Americana, Country Blues and Rock, depending on the song. Her voice is clear and strong and plain-spoken; an every woman's voice that connects to the listener instantly and holds your attention. Scrape Knee'd Girl opens with 515, a musical soliloquy about making choices that are painful but better in the long run. Here she's moving on toward an unknown future away from someone whose decisions will take her down a less desirable path. Don't Cry is a song about waking up to the important things around you. It's a pragmatic tune set to a comfortable Americana arrangement that shows off Fay's easy vocal style and talent for putting emotions and moments into words. The Last Time touches on the distance that grows between two halves of a couple over time, an honest question to the other about how/when things changed.

Ruby's Song is a song of love and devotion. The sentiment is beautiful and the arrangement is striking if a bit mundane, yet this serves to help the quiet vocal line soar. California Days is a dreamy memory song; a reverie for a time and place that likely could never be recaptured. Breaking My Heart is an entreaty to a loved one to not hurt her, set to a light Reggae beat. The light, optimistic nature of the arrangement runs at odds with the subject matter here, and Fay's cool, easy delivery makes it all believable. Dukes Up is an optimistic song about overcoming heartbreak; fighting your way through. It's set to a great blues/country arrangement that accentuates the hard-nosed yet vulnerable feel of the narrator.

Heather Fay brings a distinctive voice and approach to songwriting on Scrape Knee'd Girl. There's an emotional honesty that is unmistakable, with Fay delving into psychologically intimate subjects and moments from the experience of her protagonist. The music is wonderfully constructed, sticking primarily with a rich Americana sound that could pass for Country or Folk with a sprinkling of Rock thrown in. The album's pacing is a bit slow at times, with a couple of songs just losing me along the way, but Fay recovers well and generally delivers a very strong effort. Make sure you check out Scrape Knee'd Girl. It's worth the time.

You can learn more about Heather Fay at http://www.heatherfay.net/ or www.myspace.com/heatherfay. You can purchase Scrape Knee'd Girl through CDBaby.com, iTunes or Digstation.
Posted by Wildy at 5:10 AM