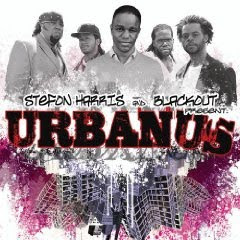 Stefon Harris And Blackout return in August, 2009 with Harris' seventh album (and first on Concord Jazz); Urbanus. Recorded in the days leading up to the inauguration of President Barack Obama, Urbanus reflects tidal waves of hope and excitement about the days and years to come. Harris and Blackout mix elements of traditional Jazz with modern and progressive strains, but also weave R&B, Funk and Soul the musical tapestry presented here.

Urbanus opens with Gone, a variation on Gershwin's Gone, Gone, Gone (Porgy And Bess). Gershwin's theme is heard here in passing moments, with Harris and Blackout expanding the boundaries and playing vociferously in the margins. There are one or two moments where the experimentation becomes so progressive it will lose fans of traditional jazz, but there's definite artistry in the moment. Buster Williams' Christina features some wonderful work on the vibes by Harris and interesting use of a Vocoder to create a sly yet sophisticated piece of mood music you won't quite be able to get out of your head. Tanktified finds Blackout dancing on the out bounds of jazz form with runs and divergences that seem more about making a musical point than adhering to any semblance of history or structure. Shake It For Me takes similar side trips but never strays quite so far off-track. There are some meticulous and unusual runs presented here that features sax, piano and vibraphone competing for primacy that avoid becoming mess and carry with them a spark of pure creation and a lot of wonderful tension.

Jackie McLean’s' Minor March is a delirious mix of traditional and avant-garde styles tailored in a suit of dark keys, scintillating in repressed light and casting off some glorious moments for the listeners' pleasure. My favorite track on the CD is the Afterthought, opening with a sound that could be a mix of Jazz and Broadway (think Cy Coleman's City Of Angels) but works quickly into one of the more traditional forms on the disc. Harris is absolutely inspired on the vibes here, and the bass player works up a major sweat along the way. Blues Denial comes in a close second for favorite track, taking on a life of its own within the opening bars of the song and seeming to pull Harris and Blackout along for a delirious ride. The aural staging creates an almost dream like-quality that launches you into a series of rapid-fire musical conversations you won't soon forget. Harris closes down Urbanus on the peaceful and introspective passages of Langston's Lullaby, a beautiful, almost ethereal piece of music that's better heard than described.

Stefon Harris and Blackout hit mostly the right notes on Urbanus, galvanizing the spirit of the times in musical structure for future generations to hear. The album loses me when it touches on the fringes of Avant-Garde Jazz, occasionally crossing over into unrecognizable cacophony, but never for long. This doesn't make it bad; it just doesn't speak to me when it goes there. On the whole, Urbanus is a strong effort.

You can learn more about Stefon Harris and Blackout at http://www.stefonharris.com/ or http://www.myspace.comstefonharris/. You can purchase a copy of Urbanus at Amazon.com, or you can download the album from iTunes.
Posted by Wildy at 5:10 AM