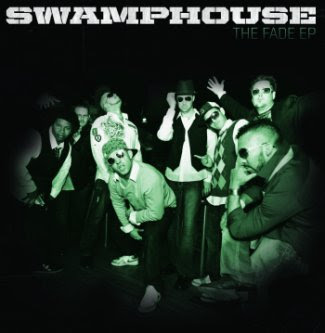 Swamphouse brings their visionary mix of Hip-Hop, Soul and R&B to market with their EP, The Fade. February Winners in VH-1's Song Of The Year Contest for 2009 (Break Down), Swamphouse has been mixing it up in Los Angeles and its environs since a 2005 coming out at B.B. King's. Led by rapper Pause, Swamphouse has one of those sounds that's so infectious and original that people stop what they're doing to find out who that band is. For The Fade, Swamphouse drafted three former students of Cal State Northridge's Jazz Performance Program as a horn section, adding a new layer to their already soul-satisfying sound. You'll dance 'til you're dizzy.

The Fade EP opens with Break Down, a delicious mix of Hip-Hop and Funk that will get your booty shaking and your feet moving. Pause smokes on rhymes and Devin is killer on vocals in the chorus. She Wants To Move will get you moving with heavy-duty Funk and a horn section that will have you grabbing for your platform shoes. Good Girl is a highly danceable day dream about finding the right kind of girl. It's refreshing in a genre know for misogyny to hear a song so positive about women (and consequently about self). Twisted is the perfect dance tune with a romantic component that will feed a lot of hormones on the dance floor without sounding like a come-on. Swamphouse closes out with This Is My Life, a highly danceable bit of autobiography that might just be the best song on the disc.

Swamphouse knows how to make you dance. In an era of tripped-out electronic dance music, Swamphouse brings it all old school on instruments played by people and creates some of the most fun dance music of 2009. Swamphouse is worth spending some time with. Bring The Fade to your next party!
Rating: 4 Stars (Out of 5)

You can learn more about Swamphouse at http://www.theswamphouse.com/. You can download The Fade EP or individual tracks through Pause.
Posted by Wildy at 5:10 AM