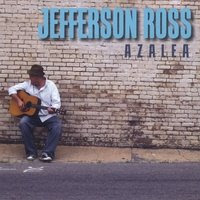 Jefferson Ross has traveled the world extensively playing his music, but his heart has always been in the south. With family connections in the music business, Ross used to sit in with The Allman Brothers’ warm-up band at the tender age of 13, when he’d play the Les Paul owned by Dwayne Allman that now resides in the Rock N Roll Hall Of Fame. Ross later toured and recorded with Jimmy Swaggart, and spent ten years on the road with Grand Ol’ Opry member Terri Clark. Over time, Jefferson Ross has shared the stage with stars like Reba McEntire, George Strait, Brooks and Dunn and Toby Keith, to name a few. In 2005, Jefferson Ross dedicated himself to songwriting; the fruition of which is his first solo album, Azalea.

Azalea opens with Hornet Hawkins, a musical tale about a bootlegger who got his start to keep the bank from foreclosing on his home. Hawkins becomes something of a local hero as he dodges the Feds while spreading good spirits all around. The country arrangement here is a classic. Change is a decent tune that talks about the human need for change, and uses it to justify all sorts of life decisions, both good and bad. The Prophet Elijah is a powerful story song about the wisdom of our elders, as seen through the eyes and ears of someone who befriends an elderly neighbor with something important to say. This is an amazing tune and is worth picking up the disc on its own. Azalea is a decent if somewhat typical country love song.

Flippin' That Hog is an epicurean adventure set a fantastic honky-tonk style arrangement. The song might be a bit blunt for some, and certainly won't be dinner music at any PETA functions in the near future, but is a great tune nonetheless. Hard To Be So Easy is an outstanding duet with Lisa McCallum about taking the easy way out in relationships (which generally isn't out at all). Reality tackles the Grand Illusion of life, reminding listeners that they control their own destinies ("If I believe in being free, then that's reality"). Lucky Now & Then is the best song on the disc. A man whose life has been full of hard luck finally gets a good break with the right woman. This song is a wow moment. Ross closes out with The Last Song, a decent tune but the subject matter has been covered so many times its hard to not hear it as cliché.

Jefferson Ross has a distinctive voice that is radio-friendly and likely to gain him some attention in the commercial realm. Azalea is a strong offering in the Country Singer/Songwriter tradition. Ross has an ability to tell stories in vibrant terms in song, and wraps them up in melodies and arrangements that stick with the listener well after the CD has stopped spinning. I highly recommend Azalea to our readers. It's not perfect, but it's a fine album.

You can learn more about Jefferson Ross at http://www.jeffersonross.com/ or www.myspace.com/jeffrossmusic. You can purchase a copy of Azalea at CDBaby.com.
Posted by Wildy at 5:20 AM