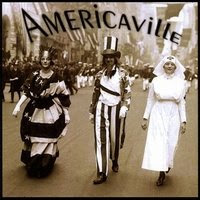 The Bludlows rose to pre-eminence in the Boston Rock N Roll scene with their mix of Rock, Punk and even Americana. With influences including The Rolling Stones, Tool, Pavement, Nirvana, Bob Dylan and Captain Beefheart, it is safe to expect the unexpected. The Bludlows’ latest CD, Americaville, finds the band testing out all sorts of musical waters.

Americaville opens with the frenetic guitars of the title track; you'll be looking for a pit from the opening chords. The bass is the star of this song, driving the action with a vibrant and inventive bass line that varies the sound. The song is loosely political, lamenting the decline of America both internally and in the eyes of the world. ATG is Post-Punk Americana that sounds like a cross between 54-40 and the Tragically Hip. The song takes a shot at the greed of corporate executives in a veiled and mildly humorous fashion. On Layin' Down, The Bludlows hit the Tragically Hip sound-alike button once again in one of the more enjoyable tracks on the disc. Blockade is very catchy, built on a guitar riff that runs 8 bars and acts almost as a counter-melody. The Bludlows close out Americaville with Point Of Reference, a seven minute-plus musical odyssey that borders on the psychedelic Noize popular in the late-1960's.

Americaville plays like a soundtrack to a world in decline, joining together post-Punk sensibilities with sonic dissonance and the occasional big hook that binds it all together. The Bludlows come across as a sonically talented but stylistically ambivalent band that play what they want, caution be damned. Americaville is an interesting listen that suggests there are more involved and divergent tunes yet to be born in the heart of Boston. Check them out and stick around for the ride. It could be interesting.

You can learn more about The Bludlows at their homepage or on MySpace. You can purchase Americaville as either a CD or download at CDBaby.
Posted by Wildy at 5:30 AM