Review: 8 Ball Aitken - Rebel With A Cause 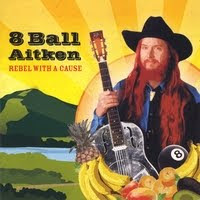 8 Ball Aitken - Rebel With A Cause
2009, Phoenix Movement Records

Sometimes the music we grew up with (individually or as a culture) is harder to hear, so wave of international artists finding success with American Roots music is no surprise. Along comes Queensland, Australia's 8 Ball Aitken, a banana picker turned guitar picker who appears to be channeling the very soul of Country, Blues and Roots music as it grew out of the Southern United States. 8 Ball Aitken's debut album, Rebel With A Cause has generated two top-10 Country singles in his native Australia and won him a 2008 EMI Music Blues & Roots Song Of The Year Award for Yellow Moon. Aitken has played dates in the UK, Singapore and North America, recently putting in a stellar performance at Canadian Music Week. It's only a matter of time before North American audiences catch on to 8 Ball Aitken.

Rebel With A Cause opens with Cyclone Country, a bluesy Southern Rocker with some serious honky-tonk in its lineage. Aitken has a wonderfully smooth and lyric rock voice that contrasts nicely with the heavily country-influenced Rock N Roll. Cyclone Country is built on a killer lick that would make ZZ Top beam with pride and a chorus you can't help but sing/hum along to. Cowboy Movie is all about taking a stand for what you know to be right regardless of the consequences. The allegory is poetic if unexpected and the melody is pure honey. The Party has a vague Dire Straits-does-Country feel to it; this is a tune that's sure to be a favorite live and will get your hips swaying even if you're not inclined to dance.

Hands On Top Of The Wheel is a straight-forward Country Rocker ala The Eagles, (complete with a sound-alike vocal). This is probably the song on the disc with the biggest commercial potential, particularly for licensing. Aitken incorporates some deliciously dirty slide guitar work on Black Swamp Creek, although lyrically the song is a bit cliché. Outback Booty Call is an amusing Southern Rock tune with clear intentions and a bit of a twist at the end. This should be another concert favorite and I could picture this ending up on a movie soundtrack somewhere. Yellow Moon features a driving bass line and great Southern Rock n Blues sound, Texas style. The track is memorable and will keep you moving. Guitar Man sounds like it should be a classic Rock staple, but it's an Aitken original. There's a feel here that's very similar to John Fogerty, and the song itself will have you scratching your head wondering where you've heard it before. Rocky Road is an upbeat, catchy southern Rocker that leads into The Other Side, which goes back a few decades for a classic sound that is refreshing.

Rebel With A Cause is one of those albums you simply can't ignore. Even with the occasional flaw it has to be in the discussion of top Roots Music efforts for the year thus far. Aitken's voice is so fluid and his delivery so down-home that he puts you immediately at ease. The musicianship on Rebel With A Cause is world class, and the songwriting is more legitimate and more original than much of the roots material you're likely to hear. 8 Ball Aitken has a real winner on his hands here.

You can learn more about 8 Ball Aitken at http://www.8ballaitken.com/ or www.myspace.com/8ballaitken. You can purchase a copy of Rebel With A Cause at CDBaby.com.
Posted by Wildy at 5:20 AM