Review: Greg Dember - I Don't Know I Think I Fell From The Sky 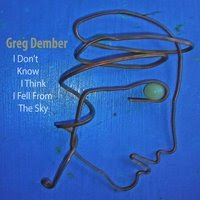 Greg Dember - I Don't Know I Think I Fell From The Sky
2008, Hieronymus Records

Greg Dember is a Seattle-based singer/songwriter with a slightly different perspective on the world. This comes across in his quirky songwriting style. Dember has been a part of numerous Seattle projects over time, including Chiefly, Lavish Cat and Tim And The Time Machines. Performing solo under the name Greg Dember allows the artist to bring to take the stage on his own or with the help of a large group of musical friends as the night or venue might suggest. Dember’s album, I Don’t Know I Think I Fell From The Sky is quirky, original and a little out of step, perhaps, with current mores in music, but may carry a distinctive charm for certain discriminating music fans.

I Don't Know I Think I Fell From The Sky is a musically interesting but lyrically lackluster effort. Dember ranges from Ben Folds style Rock ballads to fully orchestrated and vaguely morose chill-fests in song. The dynamic range of the recording never varies too significantly, meaning I Don't Know I Think I Fell From The Sky has a tendency to sound a bit homogenous at times. Lyrically, Dember is out there, writing in a mix of biographical and allegorical terms that becomes so enmeshed it becomes difficult to sort the reality from dreams. The album opens with Parachute, with the narrator caught up in the euphoria of new love. The song is quite interesting although it does get a bit stuck in the chorus. Boxes approaches a stream-of-consciousness songwriting style that is very quirky. The narrator here is in love with someone who is moving; he just hopes she doesn't move too far. Transportation takes on a Ben Folds approach in a dreamy song more or less about love. Dember doesn't have the spark or chutzpah of Folds and the song gets overly flacid at times. Imaginary Friend is an odd tune. Dember seems to count Quentin Tarrantino and Uma Thurman in this category. From here things just seem to drift, with Dember occasionally finding the ground but generally floating through songs about dashed expectations, unrequited love and all sort of naval-gazing topics.

After listening to I Don't Know I Think I Fell From The Sky, I have the distinct impression it could be the soundtrack to the life of the kid in school that everyone thinks is weird. There is a social disconnection that runs through the songs that is at times charming and at times bordering on creepy. Dember captures this persona in song as if he's lived it. From that perspective the album borders on genius, although the music, in general, just isn't really compelling. It’s a decent listen, but not one that will inspire you to come back again and again.

You can learn more about Greg Dember at www.myspace.com/gregorydember. You can purchase I Don’t Know I Think I Fell From The Sky as a CD or download from CDBaby.
Posted by Wildy at 5:45 AM

I agree with the reviewer's statement that the album is a "mix of biographical and allegorical terms that becomes so enmeshed it becomes difficult to sort the reality from dreams." And I consider that one of its strong suits. After writing that line, the reviewer summarizes several of the songs with the most banal interpretation possible, and that, to my mind, shows that the reviewer missed HUGE amounts of what is going on lyrically.

Fair enough. I am guessing you know the artist personally. I do not.

The point is that the imagery is so much inside his head you pretty much have to be Greg Dember or know him personally to have any idea what he's talking about. It might make a great impressionistic statement, but whether it's accessible to most listeners is another story entirely.

I'm glad you get it. I don't think too many people will.