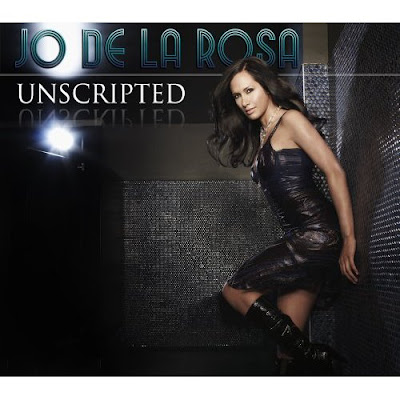 Jo De La Rosa is a quintiple threat. The Lima, Peru born and Southern California raised De La Rosa is a singer, actor, dancer, photographer and model. Featured in a starring role for two seasons on Bravo's The Real Housewives of Orange County, Jo De La Rosa is no stranger to the pop world. She has been featured in ads or articles in Playboy, PEOPLE, US Weekly, Star, TV Guide and OK. While she finishes up filming for her latest Bravo series, "Date My Ex", Jo De La Rosa found time to release her debut CD, Unscripted, a semi-autobiographical recording about starting life over in L.A.

Jo De La Rosa can sing. This isn't an example of a TV personality doing a vanity album, but of a real singer who happens to be a TV personality. De La Rosa aims firmly for the dance market with Unscripted, a collection of bubblegum dance pop that should do very well with the MTV set. Unscripted mixes elements of hip-hop with dance pop and the occasional ballad to blend a highly commercial debut CD. The overarching theme here is the loss of a relationship and a change of scenery to start over. U Can't Control Me has a defiant tone and shows of De La Rosa's voice in no uncertain terms. The rock edge to this song makes it an ideal crossover hit and easily the song with the greatest commercial potential on Unscripted.

Look But Don't Touch is a slick Janet Jackson-like tune that will very familiar to listeners on the first listen. De La Rosa pays tribute to Michael Jackson with her cover of Rumors, which is ultimately one of the weaker tracks on Unscripted. Lah Dee Dah is pure bubblegum pop with a gibberish refrain. It's perfect mindless fodder for the dance club but doesn't speak much for the artist. Rhythm Of Your Soul is a gorgeous Latin/pop ballad that could be a real winner for De La Rosa.

Honestly is the class of the album, even if the vocals sound like they've been messed with electronically. The sad part of this is, as I've said, De La Rosa has a voice. The use of vocal effects here actually detracts from what is (or should be) an otherwise intensely beautiful pop ballad. Also notable is A Little Inspiration, which is just De La Rosa and the piano. This is De La Rosa at her finest, although once again producers chose to make the vocals about effects rather than the voice.

Jo De La Rosa has delivered a good album in Unscripted. If it weren't for her producer she may have delivered a great album. This is one of those instances where too much production and messing with the sound actually detract from the finished product. De La Rosa will be with us in one form another for some time due to her multitude of talents, but I have to think she's been undercut by the guy behind the board on this one. Still worth a listen, but not what it could have been.

You can learn more about Jo De La Rosa at http://www.jodelarosamusic.com/ or www.myspace.com/jodelarosa. You can purchase a copy of Unscripted at Amazon.com. De La Rosa is also a spokesperson for the Make A Wish Foundation, where she has recorded a series of PSAs in both English and Spanish.
Posted by Wildy at 5:10 AM