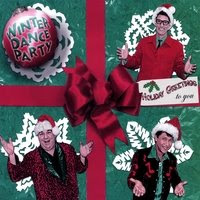 February 3, 1959 is "The Day The Music Died", as memorialized in Don McLean's American Pie. On that day the plane carrying Buddy Holly, Richie Valens and J.P. "The Big Bopper" Richardson crashed, ending The Winter Dance Party tour abruptly and breaking the hearts of millions of fans. For many baby boomers this tragedy was their first brush with mortality, and the loss of these three young Rock N Roll icons would haunt the music industry for years. We may never know what musical legacy Holly, Valens and Richardson might have left behind if this accident never happened, but we've been given the opportunity to relive the golden moments of that tour. Winter Dance Party... Holiday Greetings To You captures the essence and spirit of the Winter Dance Party tour on CD for you to enjoy.

Be sure to check out the early rock take on Let It Snow (Holly) and the Big Bopper-ized Frosty The Snowman. Feliz Navidad borrows the opening hook from La Bamba and is very faithful to the classic version you hear on the radio each holiday season. The Christmas Song is a mellow, lilting tune as arranged here, and Run Rudolph Run returns to the R&B roots of Rock N Roll. Other highlights include Santa Looks A Lot Like Daddy, Silent Night, Twelve Days Of Christmas and O Come Little Children.

Winter Dance Party... Holiday Greetings To You is good-time piece of musical memorabilia that should be a big hit this holiday season. Folks who mourned at the loss of Holly, Valens and The Big Bopper will recall fond memories listening to this disc. For folks too young to remember, this is a great introduction to a period of innocence in Rock N Roll that has long since moved on. Highly recommended.

You can learn more about Winter Dance Party at http://www.winterdanceparty.com/. You can purchase a copy of Holiday Greetings To You at www.cdbaby.com/cd/winterdanceparty.
Posted by Wildy at 5:05 AM