CD Review: The Real Stormin' Norman - Every One Tells A Story 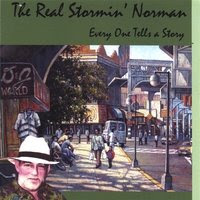 The Real Stormin' Norman - Every One Tells A Story
2006, Abaraki Records

Norman Zamcheck, The Real Stormin’ Norman, has a background that might surprise you. As part of Stormin’ Norman and Suzy, he dominated clubs in both Boston and New York City, and built enough of a following through touring to land a major record deal. After the band’s dissolution, Stormin’ Norman became a teacher and administrator at some of the toughest inner city schools New York has to offer. He takes his inspiration from the likes of Otis Spann and Mose Allison, and has hundreds of songs in his musical library. The Real Stormin’ Norman’s most recent release, Every One Tells A Story is a return to his musical way of life and the road. It’s a journey you might want to tap into.

Stormin' Norman would appear to have grown up on a steady diet of 1970's and 1980's songwriters. He seems to prefer rock with a bit of blues thrown in, and manages to write songs that don't sound entirely unlike material you might hear from Billy Joel or Randy Newman at times. At The Wastrel Bar is pure Billy Joel, ala The Stranger. Love Everlasting is a well-written love song with sociological references. Norman shows his penchant for bizarre lyrical content on Ghosts, which harkens back to the mildly diffuse days of acid rock.

There are two absolute highlights on the CD. The first is Flora And Fred. This song also has a Billy Joel feel to it and could be described as Norman's Scenes From An Italian Restaurant with a bit of Paul Simon's Darling Lorraine thrown in for good measure. The other highly notable track here is Purple Shadows; a beautiful piano ballad that explores aging and loss, and how all you have can be whittled away without a thought.

The Real Stormin' Norman is an eccentric figure. He's vocally awkward in the Randy Newman sense but without that Louisiana charm. Nevertheless he comes across as inherently real and has a talent for telling a story set to music. Every One Tells A Story is a strong CD with a couple of great moments. Norman's awkwardness on vocals does distract from time to time, but in some ways only serves to verify the reality of the artist.

You can learn more about The Real Stormin’ Norman at http://www.zamcheck.com/. You can purchase a copy of Every One Tells A Story at www.cdbaby.com/cd/storminnorman.