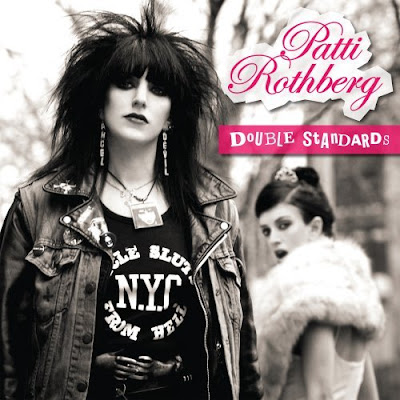 If you believe the mythology of Patti Rothberg, she was discovered busking on a subway platform on New York City's Red Line. This is the reason that her debut album was entitled Between The 1 And The 9. The 9 train in Manhattan is history, as is Rothberg's association with a major label; both for the better. Patti Rothberg liberated herself from the major label yolk with 2002's Candelabra Cadabra. In the six years from then until now, Rothberg has been very active on the New York City music scene, sharing the stage with artists such as Aimee Mann, Sasha Dobson and Mike Watt. Rothberg spent that time honing the sound found on her latest release, Double Standards. Patti Rothberg has found her musical voice.

With comparisons to Patti Smyth and Bob Dylan to live up to, Rothberg shirks it all off and writes in her own voice. The song is the thing here, but the story is what drives the song. Rothberg is literate, witty and smart. Lyrics flow like water from her mouth and build aural images that are unshakable. Patti Rothberg combines this talent with music that walks the line between pop and hard rock, for an amazingly eclectic yet consumable musical diet.

I loved Alternate Universe, a peppy rock tune that thrives on irony. I am still not quite sure what it means but it's highly entertaining. Double Standards is a highly commercial sounding rock tune that should do well in alt-rock formats. After The Parade displays the mature songwriter within Rothberg; She is a lyrical artist who sketches vignettes for your musical perusal.

Pay special attention to Hard Times, perhaps the best song on the album. It's just Rothberg and her guitar for most of this song, a stark and downplayed confessional you'll find addictive. Other highlights include the punk rocker Get Away With It; The churning cover of the Pixie's Gigantic; the gorgeous Wavelength; PT Cruiser and the Rolling Stones' Sway.

Patti Rothberg has an ability to craft songs that are both meaningful and eminently enjoyable. She is one of those unusual artists who survives the major label experience to go on and become a serious and respected artist. Double Standards combines the best of Patti Rothberg's pop tendencies and her love of hard edge rock and roll. Double Standards is a great album and definitely worth picking up.

You can learn more about Patti Rothberg at http://www.pattirothberg.com/. You can purchase a copy of Double Standards at Amazon.com as well as at most major music retailers.

Thanks so much for taking the time to review my CD. I'm really glad you enjoyed it and said such great things about it.