CD Review: Les Paul And Friends - A Tribute To A Legend 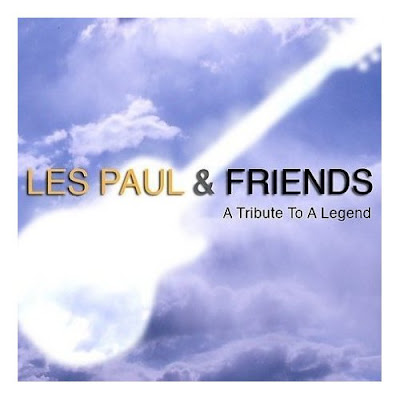 Les Paul And Friends - A Tribute To A Legend
2008, Immergent Records

Les Paul is a legend. There's no way around it. He still draws a full house at his standing Monday-night gig in Manhattan's theater district, and millions of kids grew up learning how to strum on his namesake electric guitar. At 93, Les Paul is America's Professor Emeritus of Rock and Roll, so it's no surprise that a tribute album would draw some of the biggest names in rock. Les Paul And Friends - A Tribute To A Legend features axemen Slash, Joe Bonamassa, Peter Frampton, Slash, Jeff Golub, Richie Sambora and, of course, Les Paul. Also along for the show are vocalists Joan Osborne, Mick Hucknall (Simply Red), Edgar Winter, Johnny Rzeznik (Goo Goo Dolls) and Lisa Fischer.

A Tribute To A Legend opens with Joe Bonamassa on The Good Luck You're Having, a rockabilly blues tune that will have you moving from the opening bar. Hiram Bullock’s The Walls Came Tumbling Down is a mix of blues and early rock and roll that will stick in your head for days. Johnny Rzeznik covers U2's All I Want Is You in an amazingly reverential version. I am not 100% sure why this is on a Les Paul tribute album, but it's a worthy cover. Les Paul chips in on 69 Freedom Special, built on a cantankerous blues riff with Tower Of Power style horns and some heavy funk. Other highlights include Jeff Golub’s How Long and Richie Sambora’s Great Hall Of Fame.

Les Paul is as responsible as anyone else for the start of the rock and roll era. His new brand of guitar revolutionized music in a way not seen since the birth of jazz. He was never the best guitarist of his generation (hello Chet Atkins), but he was in the upper eschelon. The fact that he's still doing it will enough at 93 to hold a regular gig in Manhattan's Theater District (on Broadway, no less) speaks volumes about his talent and longevity. The roster of artists on this tribute tells you even more about his stature in the music business. As a tribute album this is somewhat weak. It doesn't really connect to the zest or style of Les Paul in the way that I'd hoped, but it surely makes a point about Paul's greatness. Musically, A Tribute To A Legend is a strong offering with a uniquely diverse array of artists coming together on one disc. If you really want to get to know Les Paul, go find some of his old LPs and listen to what the man could do, but for a decent even collection done in his honor, A Tribute To A Legend is good enough.

You can learn more about Les Paul at http://www.lespaultribute.com/ or www.myspace.com/lespaultribute. You can purchase copies of Les Paul And Friends - A Tribute To A Legend at Amazon.com and at most major music retailers.
Posted by Wildy at 5:29 AM