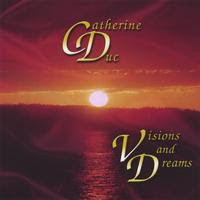 Catherine Duc is an award-winning composer of a fusion of celtic/electronica/worldbeat sounds. Her compositions have been awarded by The Philips Song Competition, The PLC Song Competition, the International Online Music Awards and the LA Music Awards. This Australian-born instrumentalist issued her debut CD, Visions And Dreams, in 2005. It is a mellow yet mind bending experience.

Catherine Duc's Celtic/New Age hybrid has found many fans over the past few years. Her compositions are generally programmed track beds with at times inspired melodies and turns of song. Highlights here include Dancing In The Mist, One Autumn Day and Incense.

Ultimately, many readers will find this to be dinner music or background music. Visions and Dreams covers new age/easy listening sounds that have been done many times over. While the album is very well done and enjoyable to listen to, it’s not the sort of project that will inspire multiple listens for folks who aren't hardcore fans of either Ms. Duc or of this particular brand of electronic/new age/dance music.

You can learn more about Catherine Duc at www.catherineduc.com. Her website offers multiple links and options for purchasing Visions and Dreams.
Posted by Wildy at 6:48 AM