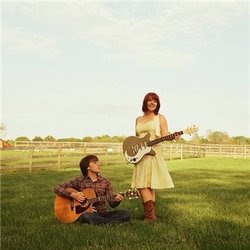 Slant is a young band from the Cincinatti area that is looking to make a name for itself.  Lead singer Michelle Korn brings a unique and unforgettable sound. Her band is comprised in part by former members of Cincinatti outfit The Silhouette, and they are as tight as can be.  Korn’s vocals can only be described as entrancing.  Nothin’ Left But Me is an ambitious debut that leaves nothing behind, and should mark the beginning of a long and successful career for Slant.

Nothin' Left But Me starts with the poppy and eccentric Ba-Ba-Ba, and builds on the peppy-but-melancholy formula with tunes such as Back Out, Parking Lot and Ballad of I-65.  The music is pure Americana: mellow rock with a country bent.  Vocalist Michelle Korn makes me think of a mix of Nathalie Merchant and Edie Brickell.  Her quirky vocals are part of the distinct charm of Slant. The instrumental work here is top notch.  The arrangements are uncomplicated and tightly delivered.  Every song here is good, but a handful are truly great.  Check out Fine, Athens and Games Are For Cheaters for other examples of great pop/country balladry.

Nothin' Left But Me is like the little album that could.  I didn't think it was going to end up making much of an impression on first listen, but Slant, and particularly Michelle Korn's voice, grow on you.  The music isn't raucous or wild, but it's memorable, and you'll find yourself humming these songs time and time again.  Just don't be surprised if it takes a few listens to really get how good these guys are.  You really have to listen to Slant to appreciate them.

You can learn more about Slant at www.myspace.com/slantband.  Right now the only way to get a copy of Nothin’ Left But Me is through Cincinatti area Indie stores such as Everybody’s Records , but will be available on iTunes and CDBaby in the not too distant future.
Posted by Wildy at 6:37 AM