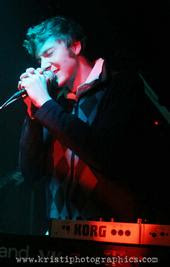 Johnny Lingo is perhaps the next big thing. Hailing from Providence, Rhode Island, the guy who always swore he’d never become a musician has become something more: an artist. Johnny Lingo behind the keys is something to behold. He writes with the bombast of Elton John or Ben Folds, and the pop sensibility of Billy Joel. His debut album, 2008’s Shake It Off, is something you’re going to want to hear.

Johnny Lingo is going to be compared heavily to artists such as Folds, John and Joel; due to the piano-driven rock style he writes in. The comparison is fair and warranted. Johnny Lingo benefits from the path they have cut in the rock universe, and he writes well enough to carry his own weight amongst such luminaries. Whether Joel-esque story songs (Step Outside), jazz-fueled rock (Foolin' Around), new wave (Fallen Angel) or Folds-style brashness (1in10), Johnny Lingo can do it all. Shake It Off is a how-to guide for making a great piano driven rock album. Other highlights include Marquee Move, This Man and Guess Again, which is the most starkly personal song on the album.

Shake It Off introduces Johnny Lingo to the world. This debut is more like a big bang than a cosmic whistle. Johnny Lingo is a rare talent who will not stay hidden. I'd like to hear another album before we truly put him in the circle with the likes of Folds, John and Joel, but he's making an argument you have to listen to.

You can learn more about the Johnny Lingo Band at www.myspace.com/johnnylingoband. Their debut album, Shake It Off is only available as a download at this time, and can be purchased through Johnny Lingo’s MySpace page.
Posted by Wildy at 7:06 AM