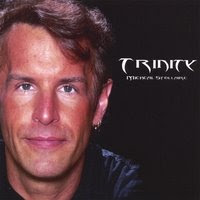 Michael Stollaire picked up a guitar for the first time when he was fourteen years old. Influenced heavily by 1970’s FM radio bands and the Beach Boys, Stollaire has crafted a sound that is unique his own. In 2007, the Los Angeles based singer/songwriter released the EP Trinity.

The three song EP opens with Little Princess, a straightforward rock tune featuring 1980's era guitar solos and arena-rock harmonies, and is actually quite a decent tune. I Can't Let You Go is a guitar ballad that has potential, but doesn't quite meet it. Stollaire has a passable rock voice, but on softer material such as this pitch issues are very evident. Just Like Yesterday returns to the 1980's hair metal sound that seems to fit Stollaire so well. Again, the vocals are passable, but the harmonies are outstanding.

Trinity is a decent turn from Michael Stollaire. I suspect that a live gig with Stollaire would be quite enjoyable, as the energy level here is fairly high. In the longer term continued live play and collaboration will help to polish over some of the rough edges evident here.

You can learn more about Michael Stollaire at www.myspace.com/theankhproject. You can purchase a copy of Trinity at www.cdbaby.com/cd/mstollaire.
Posted by Wildy at 7:15 AM