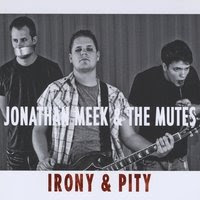 Jonathan Meek is the son of a preacher man. His earliest musical influences were the hymns from his father’s church, and this ingrained a sense of melody in him from a young age. He quickly graduated to influences such as Nick Cave, Elvis Costello & Neko Case. He studied classical theory in college, but found his muse while busking on the streets of Santa Cruz. 2008 sees the release of Jonathan Meek’s first album, Iron & Pity. With the support of The Mutes, Meek has released an interesting and powerful debut.

Meek has a sound that runs somewhere down the line between idols Costello and Nick Cave, and occasionally veers into Jim Morrison territory. Meek’s songs aren’t big on pop hooks, but are more like short films in musical form. Meek writes strongly in images, that he conveys with his eccentric voice. Iron & Pity opens with The City I Love, which comes across as kind of a post-punk Doors tune. Spark & No Fire falls into the simple melody and simple sonic overcoat song construction that Meek seems to like. It’s a simple but infectious melody. Spark & No Fire is easily my favorite song on the EP.

From The West sounds like early Costello, while On The Way Down has an accessible melody with some great harmonies. The set closes out with Take A Look, which takes on a bardic quality, as if you’re listening to one of the last great Troubadours.

It’s way too early in Meek’s career to make that assessment, but keep it in mind. Jonathan Meek isn’t quite like anyone else in the pop scene at the moment. If I had to guess I wouldn’t say that Jonathan Meek & The Mutes would ever be the darlings of the music scene. I do seem them as being the sort of band that ten years on and 7 or so albums down the road has a fiercely loyal following that follow them around and keep them eating and living well.

Iron & Pity is a bit different from the usual pop/rock stuff you might here. It’s a little bit darker and a little more simplistic in construction than a lot of stuff out there. This less-is-more approach to writing creates starkly beautiful landscapes against which Meek can tell you his stories. If Iron & Pity is any indication, you’ll want to listen.

You can learn more about Jonathan Meek & The Mutes at www.jonathanmeek.com. You can pick up a copy of Iron & Pity at www.cdbaby.com/cd/jmtm.
Posted by Wildy at 6:30 AM