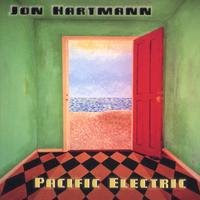 Jon Hartmann is a musical magician of modern jazz, rock, funk and Afro-Cuban grooves (with some occasional reggae thrown in).  He walks the line between Avant-Garde jazz and a new provincial fusion that is all his own.  On Pacific Electric, Hartmann is at his best.  Pacific Electric is an ode to the Pacific Electric Railway, which was destroyed in the 1950's in order to ensure that more people bought cars (if you can believe that).

Jon Hartmann delivers ten songs of cool modern jazz on Pacific Electric.  There's even a little funk going on here, such as in They Laughed, probably the tune I enjoyed most on this album.  Other highlights include the soulful Hidden Agenda, It's Always Now and Gridlock.  The playing here is incredibly tight, and Pacific Electric manages to maintain a little bit of a live feel in the recording. Jon Hartmann's band is top notch, and he has delivered an excellent listen in Pacific Electric.

Hartmann has an ability to push the envelope just enough to make it interesting, and not quite so much to lose touch with the essence that is jazz.  Pacific Electric is definitely worth a listen.

You can learn more about Jon Hartmann at www.jonhartmannmusic.com.  You can purchase a copy of Pacific Electric at www.cdbaby.com/cd/jonhartmann5.
Posted by Wildy at 12:29 AM