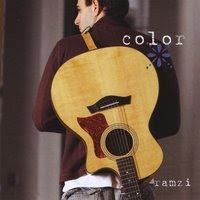 Ramzi Khouri moved from California to New York City in 2006 to try to make it as a musician, leaving behind office politics and the California Sunshine. Khouri brought a little of his own inner sun with him, however, and we get our first glimpse at it on his debut release, Color.

Color opens with When I Go, which might be the ultimate dysfunctional relationship song about a man who keeps trying to leave but gets sucked back in. Ramzi then moves on to Blows Like The Wind, an Americana-flavored folk/pop classic that would be a huge hit if it ever found placement in a prime-time TV show. This is the sort of song that rockets a singer-songwriter from unknown to a buzz-word. If anyone reading this is doing licensing for television or movies, you need to grab hold of this song.

Other highlights include Color, Words, and Breaking Free. Ramzi brings a rock troubadour's story-telling sensibility, a fresh voice, and some outstanding guitar work on Color. The songwriting is mixed, with some of it very polished, and some less so. What is clear is that this is a young artist who is learning and growing in his art, and Color is a strong starting point. Where Ramzi is totally on his game the music is sublime, and when he's off he's not off by much. I would strongly suspect that Ramzi will continue to grow into an accomplished artist. Color is his musical hello to the world, and it is very welcome!

You can learn more about Ramzi at www.ramziguitar.com. You can purchase a copy of Color at www.cdbaby.com/cd/ramzimusic.
Posted by Wildy at 6:36 AM