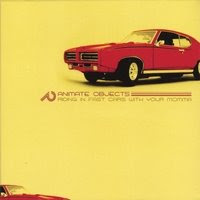 More attention should be paid at Hip-Hop/Rap that eschews the marketable gangsta image and tries to be real. Chicago's Animate Objects does more on one album to forward the musical art form of hip-hop/rap than an entire generation of ersatz gangstas has managed. Riding In Fast Cars With Your Momma brings sharp, intelligent poetry and mixes it with imaginative and inventive hip-hop Philadelphia Soul. eMCee CZAR Absolute is part Tupac and part Isaac Hayes, bringing a warmth and intelligence to the fore in his music that is lacking in much of the hip-hop/rap that makes a splash on top-40 radio.

Animate Objects is very well known in the Chicago area, and deserves to be widely known and revered far beyond Second City. Their mixture of eMCees, a DJ and live instruments in their live show sets them apart musically from a lot of acts out there. The fact that Animate Objects project positive messages in the music while still talking about the problems facing Black America in real terms is also refreshing. Songs such as Midnight Blue, Phoenix and Zeno's Paradox are wonderful representations of the artistry on Riding In Fast Cars With Your Momma. There are also a couple of ballads here (Beautiful, Slow) that are definitely worth bending your ear for.

Also check out Get Back! for one of the most fun and entertaining songs you've likely heard in a while. I can only begin to imagine what a live show would be like, but it certainly sounds like an entertaining night out. Animate Objects is at the head of the class for intelligent and accessible hip-hop/rap. Riding In Fast Cars With Your Momma is true to the artistic vision of Animate Objects, and doesn't fall prey to the traps of commercial hip-hop. Embrace Animate Objects.

You can learn more about Animate Objects at www.animate-objects.com, where you can purchase a copy of Riding In Fast Cars With Your Momma. You can also check them out and stream some audio at www.myspace.com/animateobjects.
Posted by Wildy at 11:07 PM