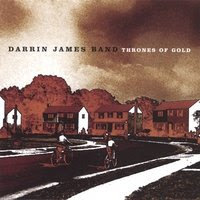 Brooklyn’s Darrin James Band wastes no time. Thrones Of Gold bolts right out of the gate with Trivial, a seeming call out and beat down to a former colleague (I don't see you in any of my future bands). Trivial is a classic southern rock/rhythm and blues hybrid that would make .38 Special green with envy. Trivial will definitely get stuck in your noggin. Duct Tape moves on to a delicious R&B/blues vibe with some amazing Hammond organ work. The title track, Thrones Of Gold, has a bit of an alt-country feel to it that seems entirely nature for Darrin James, with some wonderful pick-guitar work.

James seems to have taken in all of the musical styles of the American South and rolled them into his own hybrid Americana. Even the vindictively misogynist Only A Woman grows from this musical patois without seeming out of place. Darrin James seems to write songs in the same ilk as Randy Newman, where the songs are more windows into the lives of others. James seems to capture the essence of a different person or personality with each song, a little like a short story writer who likes caricature.

Had Enough Of Me opens with Honky-Tonk piano and turns into a gin-joint blues tune that just won't leave you alone. The song is infectious and will traipse across your consciousness at odd times once you've heard it. Hate That Word is classic Americana that deals with a man's fear of the word "Love". Other highlights include B3 laden Crazy World, the Dust In The Wind like epic Herie, the bluegrass Dusty Road, and the ultimately hopeful Lucky Man.

After hearing all of the dark portraits that Darrin James paints on Thrones Of Gold, he reveals ultimately himself on this last song. Darrin James is part Randy Newman, part Bruce Springsteen, and 100% original. In a different time in the music industry James would be writing the terms of his own contract with a major label. As it is he's more accessible and writing incredible music. I have to admit that this CD surprised me, as the first time I listened to it I just didn't connect with it. But then I sat down and gave it a second listen. The lesson is that with the Darrin James Band you need to really listen to the music and to what he has to say. He's a little too deep to get on a casual listen, and just too good to miss. Add Thrones Of Gold to the list of Wildy's World's Desert Island Discs.

To learn more about Darrin James Band, check out www.darrinjamesband.com. You can purchase a copy of Thrones Of Gold at www.cdbaby.com/cd/darrinjamesband.
Posted by Wildy at 6:47 AM