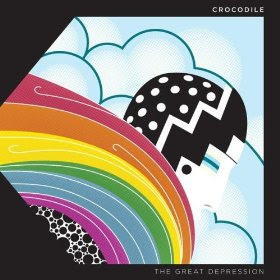 Cousins, a husband and wife, piano, synthesizers and a studio caught in the middle of an Oklahoma City gang war. This is the backdrop from which springs The Great Depression, the debut EP from Crocodile. Sweet syrupy pop ensues, sounding something like Kevin Hearn era Barenaked Ladies with a female vocalist. Crocodile has been lauded by CMJ and Sonicbids, and I guarantee that you'll be next.

Opening with The Dinosaur, singer Rachael Brown sets the tone, surfing the waves of synth and keyboard with killer vocals. August Is Over sounds it walked right off of a BNL record. We Speak For Everyone has an eighties sound to it, with synthesizer picking up the faux-guitar part while also providing carillon instrumentation.

Something To Be Proud Of of sounds more like a guitar rock tune that in this care is driven by synthesizers and distortion, all with a faux string section. Derek Brown pitches in vocals on Pageant (as well as We Speak For Every). This again has a strong 80's pop feel to it ala Mike & The Mechanics. The last track is called Two Other Numbers, and appears to be more of a sonic experiment that resolves into a song. The opening is a bit of cacophony that I didn't enjoy a great deal, but the song itself was quite pleasant to listen to.

Crocodile is a little bit different than your usual rock band. They have a bit of syrupy sweetness to them and great pop sensibilities. They seem to like to see what they can tease out of the various keyboards/synthesizers they play. This is almost a distraction at times, but on the whole the result is a rather tasty pop treat. The Great Depression is a classy if ironically named debut, and bodes well for the future of Crocodile.

You can learn more about Crocodile at www.myspace.com/crocodilemusic. You can purchase downloads of The Great Depression from Amazon, eMusic, Rhapsody or through the band’s MySpace page (link above)
Posted by Wildy at 6:38 AM