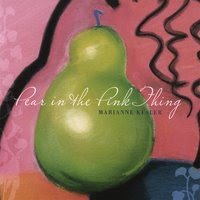 Ohio native Marianne Kesler has been a darling of the folk, coffeehouse and college circuits for the better part of two decades. Starting out in 1993, Kesler has culled a reputation as a highly personal, and personable, songwriter whose imagery shines through her songs. Pear In The Pink Thing is a collection of ten original tunes and 2 Neil Young covers; Kesler went for a stripped down motif this time around to make the songs more reproducible in a solo-live setting. The result is a sonically gorgeous and highly intimate set that is as artistically articulate as it is accessible.

Mystery starts things out in a fine, pop-laden folk arrangement about coming out of your shell and being your own person, and not justifying it to the world. This song is a tremendous declaration of self without sounding imposing or in-your-face; it's all about the protagonist and no one else. Kesler has one of those voices you could listen to all day, the perfect mix of sultry, sweet and an earthy stillness that is comforting. Every Time is a perfect example of this mix in a song that is by turns sultry, vulnerable and verging on frustration. Poets Dream is structured like a dream, opening with tendrils of thought said to music that coalesce into a coherent idea before fading away into fractal thoughts.

My favorite song on the disc is Catch Me If You Can. There is a certain pathos to this song; The protagonist is a leaf or a bit of dandelion fluff or a person whose thrill is being chased. There is a daring quality to the song that seeks to be caught and loves the chase, but the chase is much too interesting here, and you know inevitably that once captured there will soon be another chase, if it ever stops in the first place. 2 O'Clock is another must-hear, written in a classic finger-pick arrangement, this might be the best writing on the album. Kesler's inclusion of Ohio had more to do with it being associated with her home state than anything else, but it is particularly apropos in our current timeline. Kesler's reading of the song is impeccable, adding a little more swing to it than the original but staying with the same essential flavor. The Needle And The Damage Done was chosen in tribute to Kesler's father and his struggles with drug addiction. That personal investment shines through on a rendition that is practically electrifying.

Marianne Kesler is a first-class talent. Kesler doesn't need to be flashy to get your attention; her strong, clear voice relays thoughts and emotion in gorgeous tones that leave you on the edge of your seat. As a songwriter Kesler's work is top-notch. Pear In The Pink Thing is a second coming-of-age album. Most artists who record for any length of time will have more than one. Kesler has always been a strong songwriter with highly personal songs, but with Pear In The Pink Thing she has crossed the line from good to great. I won't be surprised if Kesler is eventually considered one of the essential female singer/songwriters of folk music.

You can learn more about Marianne Kesler at http://www.pearinthepinkthing.com/ or www.myspace.com/mariannekesler. You can purchase a copy of Pear In The Pink Thing at www.cdbaby.com/cd/kesler6, or you can download the album through iTunes.
Posted by Wildy at 5:20 AM