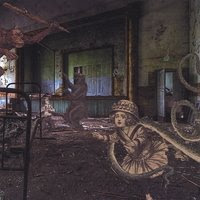 Beati Paoli – A Sense Of Urgency
2009, The Noising Machine

Beati Paoli is a Post-Punk/Modern Rock quarter from Des Moines, Iowa. With influences ranging from The Clash and The Talking Heads to The Smiths, The Cure and The Psychedelic Furs, Beati Paoli looks to set the rock world on its ear in fits of jangly guitar and retro-melodic anti-pop. On A Sense Of Urgency, Beati Paoli displays an unmistakable theatrical bent. This same quality has won over fans on the road as Beati Paoli has toured the US with bands such as British Sea Power, Man Man and Cursive.

A Sense Of Urgency opens with Rabble Rouse, an energetic, almost post-Beatles sounding bit of Brit Pop. A big, rhythmic chorus is the highlight of this song. Beati Paoli manages to maintain a strong melodic sense in spite of this highly rhythmic and repetitive arrangement. Maggie is a definite highlight, falling into something of an Elvis Costello groove (only slightly darker). Girl Friday fits perfectly into the whole Cure/Smiths feel. Also be sure to check out While We’re Young. Beati Paoli finds a real pop gem in this song, disguising it with an anti-pop feel that’s ironic, intentional or otherwise.

Beati Paoli strikes me as a band that would be a lot of fun live. There’s a fair amount of energy on A Sense Of Urgency, but there is a dark mood about the music that really runs counter to the inherent pop sensibility the band brings to the table. While ironic in small doses, the overall effect is more of a general ambivalence. I suspect the music comes alive in concert, and would recommend you reserve judgment until and unless you have the chance to see them live. In the mean time, it’s a decent album with some very good songs.

You can learn more about Beati Paoli at http://www.beatipaoli.net/ or www.myspace.com/beatipaoli. You can purchase a copy of A Sense Of Urgency at www.cdbaby.com/cd/beatipaoli.
Posted by Wildy at 5:00 AM