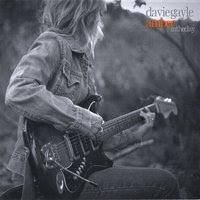 Los Angeles-based Davie Gayle grew up on country music in New Jersey, where her father was a guitarist in a country band. Her entire family was musical, and Gayle eventually formed a duo with her brother (The Gayles). After moving to LA, Michael began his own label and went into production while Davie threw herself into songwriting and performing. Davie Gayle’s debut solo album, Amber In The Clay, is a distinct and poignant collection of songs drawn from her own life experiences. Comparisons to Emmylou Harris, Patty Loveless and Lucinda Williams are understandable, but Gayle’s point of view as a songwriter is practically unique.

Amber In The Clay opens with the title track, a story song paralleling a scientist who finds the building blocks of life stored in the earth and a person of significance who helps a broken or lost person rebuild their life. The song has a classic country tragic sound while moving toward a positive message. Get Me is a great roadhouse country tune that sounds like it should be a hit on the country charts. If Shania or someone of that ilk recorded this song you'd hear it everywhere, and Gayle is a much better vocalist. 3:09 finds Gayle giving a classic country performance in a voice that mixes her sweet tone and just the right dose of bittersweet sorrow. Channel To You takes more to the pop side of the scale with some R&B and Gospel influence in one of the more daring tracks on the disc.

Roundabout is one of the best story songs I've heard in some time, culminating in a positive message that parallels Robert Frost's Stopping By Woods On A Snowy Evening. Gayle's sweet, honest voice is the perfect instrument to deliver this song, and she deserves real attention for this one. You Don't Say is a country flavored blues rocker ala Bonnie Raitt with an innate pop sensibility that will turn a lot of heads. Doghouse Flowers lets Gayle rip it up a little; this one will be a particular favorite of the ladies. Rockabilly Bug will have you reaching for your dancing shoes and cowboy hats.

Amber In The Clay is a pleasant surprise, hitting the high points of country music without succumbing to the Top-20 Country milieu that pervades commercial radio. Davie Gayle has a tremendous voice mixing sweetness with just a hint of mischief, and the arrangements here are out of sight. Amber In The Clay is music you need to hear; a potential breakout disc.

You can learn more about Davie Gayle at http://www.daviegayle.com/ or www.myspace.com/daviegayle. You can purchase a copy of Amber In The Clay at www.cdbaby.com/cd/daviegayle.
Posted by Wildy at 5:20 AM