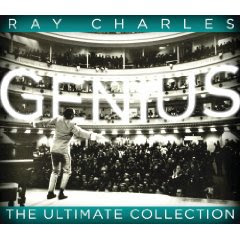 Ray Charles is a legend, an icon. His voice is instantly recognizable. Folks from 8 to 80 know who Ray Charles is. Even my two year old loves Ray Charles (particularly Hit The Road Jack). Charles has been the subject of numerous collections over the past several years, all claiming to capture the "best of" or the "essential" Ray Charles. Next up, on April 7, 2009, Concord Records releases Genius: The Ultimate Ray Charles Collection, twenty-one of Ray Charles most well-known songs from the classic period of his career.

From a sound quality perspective this CD is as good as it gets. The one live track, Hallelujah, I Love Her So is so crisp and clean that if you close your eyes you'd almost think Ray Charles was right in front of you performing. From start to finish we get Ray Charles at his Pop/R&B/Blues best. Not much of Charles' later material is represented here, but for casual and new fans that won't matter much. Hit The Road Jack is here, as is What'd I Say (Part 1). I Can't Stop Loving You, I've Got A Woman and You Are My Sunshine are also here. Of course no Ray Charles collection would be complete without Georgia On My Mind, Charles' signature song. And if you haven't heard Ray Charles' cover of The Beatles Yesterday you're in for a real treat, and of course the album closes out with America The Beautiful.

If you have never really listened to Ray Charles this is a good place to start. So many artists over the past two generations have been influenced by Charles it's impossible to come up with a number. If you are a long-time fan then you probably have all of the material presented here, but the sound quality might make it a nice addition to your collection anyway. Whatever your musical tastes, you can't afford to not be at least acquainted with Ray Charles.

You can learn more about Ray Charles at http://www.raycharles.com/the_man.html. Genius: The Ultimate Ray Charles Collection hits shelves on April 7, 2009. You can pre-order the collection at Amazon.com.
Posted by Wildy at 5:25 AM