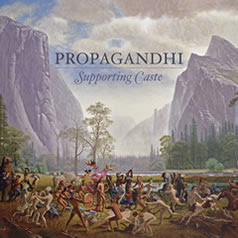 Winnipeg rockers Propagandhi rip the roof off with their fifth album, Supporting Caste, released March 10, 2009. Recorded between their own Illegal Combatant Studios and the Blasting Room in Ft. Collins, Colorado, Supporting Caste is everything you've come to expect from Propagandhi, ranging from melodic punk rockers to thrash/metal influenced alternative folk. Producer Bill Stevenson (Black Flag, Descendants, Zeke, 7 Seconds) brings out the best in Propagandhi, highlighting both softer and heavier elements of their sound without ever overbalancing the project.

Supporting Caste opens with Night Letters, throwing down the gauntlet with heavy guitar and Speedcore rhythms. Supporting Caste bemoans the sacrifices made by everyday people for the glory of political and military leaders in an acerbic and intelligently written musical diatribe. Vocalist Chris Hannah is surprisingly melodic and listenable, possessing a voice that could easily carry more nuanced material. Tertium Non Datur is the most interesting composition on the album, with an incredibly vibrant and varied arrangement that will be fun for musicians to pick apart and recreate, but Dear Coach's Corner is my favorite song here. It's a musical open letter to Ron MacLean and Coach's Corner about the use of popular media to push propaganda and "right thinking". The song is intelligently written and highly melodic. Coming off that highly civil musical objection Propagandhi throws off all ties and rips into the thrash anthem This Is Your Life.

One of the more interesting (and disturbing) songs on Supporting Caste is Human(e) Meat (The Flensing of Sandor Katz), about a theoretical Vegan concept of poetic justice for a carnivore. Potemkin City Limits is an ode to small towns and how they suffer in hard times. Other highlights include The Funeral Procession, Without Love, Incalculable Effects and Celtic flavored The Banger's Embrace.

Propagandhi's Supporting Caste is their best effort yet. The wisdom of years meets with vigor of their youth for a dynamic creative wellspring of songs that beg to be heard. Longtime fans will be pleased that their edge appears none the worse for wear in spite of a more mature (yet still intelligent and confrontational) songwriting style. Don't miss Supporting Caste. It's a keeper.

You can learn all you want to know about Propagandhi at http://www.propagandhi.com/. You can purchase a copy of Supporting Caste directly from G7 Welcoming Committee Records.
Posted by Wildy at 5:20 AM

I would almost go as far as to call this the best album ever?