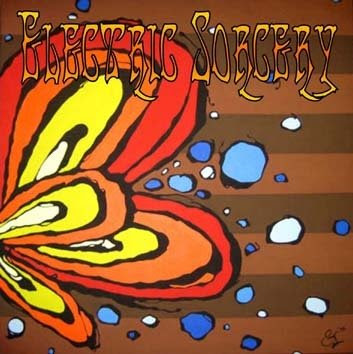 Electric Sorcery opens with Mother Sea, a funky bit of early 1970's hard rock. Electric Sorcery plays on the same psychedelic plain as Jethro Tull, Deep Purple or Jimi Hendrix, although perhaps with not quite so much imagination. Law & Order is a frenetic rocker with a quasi-rap vocal that sounds a bit like Rush on Roll The Bones. A Switch In 9 Saves Time has manic guitar work and an infectious energy but never quite evolves into more than a showpiece. No Angel is an electric funk mind bomb, ala Hendrix, with subtle guitar work, some funky bass and an eclectic rhythm track. My favorite track on the CD, Life Goes On, is built on some dirty guitar work and a driven vocal that's part Red Hot Chili Peppers. Other highlights are Son Shadow and The Nubians.

You can learn more about Electric Sorcery at www.myspace.com/electricsorcery. Electric Sorcery is currently only available locally in Vermont, but if you contact the band through their MySpace page, I’m sure you can work something out.
Posted by Wildy at 5:52 AM

I've seen Electric Sorcery perform live many times. Not only do they rock the house and get everyone up dancing, but they play "musical chairs", switching instruments, to the delight of the audience.

They're truly a versatile, original band that deserves more exposure.