Review: The ConSoulTant - Spend The Night 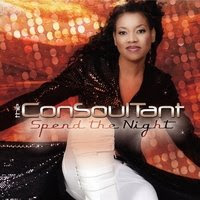 Selita Boyd is no stranger to the stage or to music. The former Miss Black Georgia first runner-up and Georgia Tech cheerleader has been involved in the music industry since the mid-1990’s, when she worked for LaFace Records (founded by Antonio “L.A.” Reid and Kenneth “Babyface” Edmonds). Boyd was one of the first women in Atlantic to run a high-end digital recording studio, working with LaFace artists, but also artists from Block Entertainment (Bad Boy Records) and So So Def (including Raven Simone). She’s also an accomplished computer programmer, but music is her first love. In 2009, Boyd finally releases her debut album, Spend The Night, under her stage name The ConSoulTant. A mix of urban, pop, rock and jazz sounds, The ConSoulTant defies categorization with strong songwriting and a presence that will knock you out.

The ConSoulTant opens with Spend The Night, a heavy dance tune with a catchy beat. The voice isn't quite what you'd expect on a pop/dance record, being both a bit fuller and deeper than what you generally hear on these kinds of songs. Have U Googled Yourself 2Day is another solid dance tune. Musically sound, the song is a bit lyrically awkward. The ConSoulTant's voice opens up a bit more here and is really quite pleasant, although much more enjoyable in her upper register. Operator is a pop/dance hybrid featuring the reggae/rap of Tara Lynn. Lyrically lightweight, the song will do well in clubs but probably doesn't have a lot of legs outside their walls. Hanging In The Picture opens with an unusual rhythmic vocal cadence that is quite promising before falling into a musical rut that is stylistically indistinguishable from much of 1990's R&B Dance/Pop.

Dry Tears finds The ConSoulTant in her upper register with a song dedicated to those whose loved ones are serving in the military overseas. The song is a pleasant listen. The vocals are good, but the song is a bit stilted lyrically. Do You Still Love Me hits the dance floor with relationship issues. The ConSoulTant seems to excel at this sort of dance music where the lyrical content isn't as important and the vocal requirements are mid-range. Need Someone dazzles with some impressive vocal harmonies in a classic disco arrangement ala Donna Summer. One Step Away is the probable highlight for most: a classic love ballad without much affectation or over production. While this setting puts the ConSoulTant's vocal flaws more clearly on display, its the most honest and unfettered performance on the disc, and very much welcome for that. The disc closes out with remixes of Spend The Night and Need Someone.

The ConSoulTant is obviously very well connected in the music industry, and does have a certain level of talent, but Spend The Night just doesn't live up to the hype. The ConSoulTant has a pleasant but not overwhelming voice. The material is better than average but generally not self-distinguishing (the best moment musically on the disc is the sax work of Charles Robinson on the remix of Need Someone). Lyrically, The ConSoulTant is a bit awkward at times. She excels with the dance material.
Rating: 2.5 Stars (Out of 5)

You can learn more about The ConSoulTant at http://www.theconsoultant.com/ or www.myspace.com/theConSoulTant. You can purchase a copy of Spend The Night at www.cdbaby.com/ConSoulTant.
Posted by Wildy at 5:43 AM