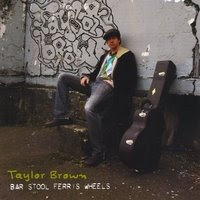 Taylor Brown has music in his blood. The Kirkland, Washington-based singer/songwriter is the son of a Broadway singer and began performing himself at the age of four. Brown is thoroughly DIY, constructing his own home studio so that he could record his own material in his own fashion. The resulting debut album, Bar Stool Ferris Wheels is all Taylor Brown, all the time. The artist plays and sings all parts on the CD, recorded over a two-and-a-half year period. With a dense lyrical style reminiscent of Jason Mraz and a penchant for modern rock guitar, Brown has developed a sound with real commercial potential.

Bar Stool Ferris Wheels opens with a Ben Folds-style piano rocker called Coin Toss. Brown's voice is quite pleasant to listen to and the instrumentation is, if not unique, at least interesting. Coin Toss is a lesson in trading fate for chance and is well written, although perhaps a bit unfocused lyrically. Brown has major guitar skills, as displayed on What She Says. This catchy tune has the lyrical density of Jason Mraz tune and is accompanied by some amazing guitar work. This is probably the most likely single on the album with a very catchy melody and beat. Don't Look At The Sunshine is catchy in a disjointed fashion that would do quite well on what passes for pop radio these days. These Strange Worlds features some of the most frenetic guitar work on the album and is worth listening to for that alone. I enjoyed Faces Turning, although I still think Brown is pushing a little too much lyrical content into the song structure here. My favorite song on the disc is Flash Back. The song is presented in a strong arrangement with its pop sensibility intact. You still get that sense of lyrical hyperactivity here but you can hear Brown trying to pull back just a bit. Other songs of interest are That Way I Need You, Ode To Downs and The Days When I Was Young.

Taylor Brown has loads of musical talent, and as a composer I'd put him up against the best in pop music right now. Lyrically he has at tendency to try to do too much within the framework of a song. This isn't necessarily a fatal flaw but it does create some awkward moments on Bar Stool Ferris Wheel. Even with that said, it's a great debut. A little more time doing this and perhaps the opportunity to collaborate with other musicians will wear away the rough edges and I suspect Brown will be a top notch songwriter in time. For right now he's a talented rookie coming out of Spring Training ready to set the world on fire. This kid can't miss.

You can learn more about Taylor Brown at www.myspace.com/taylorbrownplaysmusic. You can purchase a copy of Bar Stool Ferris Wheels at www.cdbaby.com/cd/taylorbrownmusic.
Posted by Wildy at 5:10 AM

I listened to a streaming version of this disc and really liked what I heard. Is is available on Itunes?