Review: Brad Hammonds - Through It All 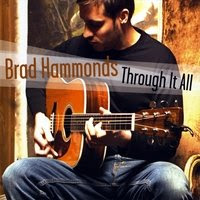 New York City's Brad Hammonds is familiar to many for his work with Brazz Tree. He is a regular at city hot spots such as The Blue Note, The Living Room Joe's Pub and Rockwood Music Hall. He possesses a highly percussive guitar style, falling somewhere between Richard Thompson and Ani DiFranco, and brings the same sort of laid back spirit to his music that has made Dave Matthews a fan favorite. 2009 sees the release of Hammonds' debut solo album, Through It All, a musical experience you don't want to deny yourself.

Through It All opens with the title track, sounding like a Paul Simon/Dave Matthews hybrid. This is a dark and meaty acoustic tune with some edgy harmonies and a bass line that walks the song along. The Story Of A Man That Lost Everything is a great instrumental arrangement, although I wasn't impressed with the vocal line on this one. Medicine finds Hammonds digging into the signature rhythmic guitar style of his. This is a driven song that will stick with you when its done playing. The Judge sounds a bit like personal favorite Michael Kroll. I enjoyed the song, but the vocal line was a bit low in the production settings and was difficult to follow in the chorus. You'll want to check out Fade Away, particularly if you play guitar; Hammonds dazzles with an intricate and fluid performance here. Other highlights include Losing Control, Weightless and Indignation.

Brad Hammonds has a distinctive and complex compositional style fueled by his high-energy, rhythmic guitar style. His voice is decent, but doesn't quite keep up with his guitar play on a few of the tracks presented on Through It All. This is more of a production issue than anything, as often the loss comes because the vocal line is too low for Hammonds to generate significant volume, or the production settings for the vocal line are too close to the instrumentation to hear them properly. On the whole, Through It All is a strong effort. The songwriting is solid and Hammonds is a wizard with the guitar. I suspect he'd be uber-impressive live.
Rating: 3.5 Stars (Out of 5)

You can learn more about Brad Hammonds at http://www.bradhammonds.com/ or www.myspace.com/bradrhammonds. You can purchase a copy of Through It All at www.cdbaby.com/cd/bradhammonds.
Posted by Wildy at 5:10 AM