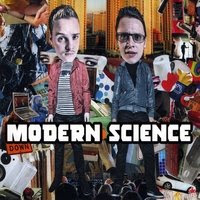 Modern Science is great for the first seven songs. There's an element of Devo-esque geek chic that runs deep below the surface of wonderfully constructed pop gems. Look Where You're Walkin' is funky and infectious bit of modern guitar Pop you won't be able to get out of your head. Every Little Thing has some serious hooks and is very danceable. I'm The One (Pick Me) is the highlight of the album. This song could be a top ten single on the Pop charts with the right support. It's that rare rock/pop song that would be as accessible to the club and dance scenes as it would be to mainstream and AAA radio. Release this in May and you have a potential "summer song" that will be around for years. Baby Please has a bit of a classic Motown sound to it and is highly entertaining and danceable. Modern Science changes the vibe a bit on the virulently electro-rock Whatever You Say, and then again as they bring the funk on U Funk Me Up. Even the modern rock meets Devo sound of Desperately fits perfectly with the dynamic Modern Science has established on their self-titled debut.

By the time we get to the last three songs it seems like Modern Science has exhausted their A material and picked out a few songs to fill out the album. While good, these last three just don't have the energy or urgency that characterizes Modern Science up until this point. While this may have been a conscious choice, and the songs themselves aren't bad, they are a bit of a come down from the first seven.

Modern Science has a great, catchy pop sound that is bound to grab some attention. If another golden age of Pop/Rock music is about to start then don't be surprised if Modern Science is one of the bands at the forefront. The first seven songs here are Desert Island material; the last three worthy listens. All in all, Modern Science is an outstanding effort. Make sure these guys are on your "got to check them out" list.
Rating: 4.5 Stars (Out of 5)