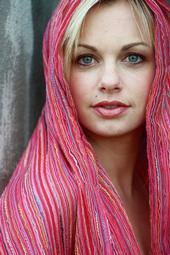 Summer Mencher is a groundbreaking Progressive Folk artist who bends the boundaries between genres as easily as breathing. Folk, Rock, Rap, Arena-Rock harmonies and the occasional flirtation with Middle Eastern scales all work together to create a sound that is familiar on the surface and mind-bending in the musical waters than run beneath. Mencher released her Stranger To Stronger EP in January, 2009 as a prelude to her full length release, Break The Mold, due in May, 2009. Mencher won first place in the 2008 Evolve Singer/Songwriter Competition. Mencher holds a degree in Music Therapy from Berklee College of Music in Boston, and performs regularly in orphanages, schools and hospitals.

The EP opens with the title track, Stranger To Stronger, inspired by a music program for troubled youth Mencher worked on during her Music Therapy education. A typo in a search engine reminded Mencher how small actions can affect major changes (Stronger becomes Stranger). The song features Spoken/Word rap verses mixed with a sung chorus and is remarkably fresh sounding. Wish Me Luck is an open faced song about the experience of falling in love. Mencher's voice has a velvety tone that is a pleasure to listen to, although it's not your typical pop/rock voice. Waves parallels the ebb and flow of human emotion with the rise and fall of the ocean. The song weaves its way from still waters to stormy seas and all the fluctuations in between, just like the human heart. More of a sonic painting than anything, Waves is a musical work of art. Hang On is a musical salve that falls halfway between Tori Amos and Sarah McLachlan; piano and strings work together to soothe while Mencher's words act like a tonic to those who have fallen. For all of that there's not a bit of cliché in the song, which surprised me by being better than I thought it might from the artist's description. Cold Wars speaks to the inner struggles that all people endure in the course of day-to-day life and how the tension from these struggles feeds our spirit's sense of play. Cold Wars features some of the most stunning harmonies on the disc (along with Waves) and is a sonic pleasure. Beyond Repair is more of a driven folk/rocker, ala Ani DiFranco, dealing with the human ability to overcome by accepting the past, accepting our part and moving on. The tension and resolution in this song is achieved in unusual ways, with the sonic highs and lows at times running in counterpoint to the lyrical and vocal heights. The song is a very intriguing listen.
Summer Mencher has an interesting take on songwriting. Working from the standpoint of a therapist she sees the world around her in almost clinical terms, yet finds the personal angle needed to truly understand the twists and turns about which she writes. Stranger To Stronger is surprisingly vibrant compared to much of the music that comes out of the Music Therapy field (which tends predominantly toward New-Age fluctuations in pitch and tone that eschew song structure much less personality). Stranger To Stronger gets high recommendations, and gives us cause to look forward eagerly to Mencher's full-length release, Break The Mold.
Rating: 4 Stars (Out of 5)

You can learn more about Summer Mencher at www.myspace.com/summermencher or http://www.summermencher.com/. You can purchase downloads of the tracks on Stranger To Stronger on Mencher’s MySpace page using the SnoCap application. No information on availability of physical CDs is available at this time.
Posted by Wildy at 5:10 AM